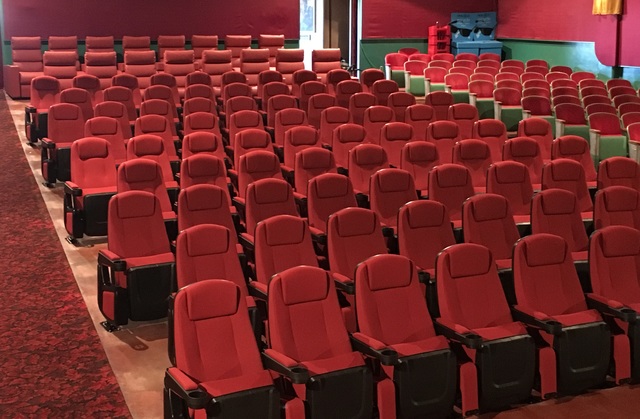 The Sunset Theatre is located in Connell, a small town in eastern Washington. It was built in 1952 by August Aubert and was originally called the Aubert Theatre. The name was changed to the Sunset Theatre in the late-1950’s because of several damaged marquee letters and also the fact that people had trouble pronouncing Aubert correctly. The word “Sunset” was made from “Aubert” by replacing only three letters on the marquee.

The Aubert Theatre opened on September 4th, 1952. The first movie played was “The Wild North” with Stewart Granger and Cyd Charise. In the early days of the theatre, before television had become widely popular there were shows six days a week, and two features per week. Cartoons and newsreels were also part of the show. The theatre had the capability of showing dual projector 3D movies by synchronizing both projectors to run at the same time.

The theatre also had an elaborate sound system that was the very latest in technology. It was actually two sound systems connected by a complex switching system. The theatre could play standard monaural movies or the latest in four channel magnetic stereo films. They soon stopped producing magnetic stereo films and so most of the old sound system and most of the speakers until recently have been virtually unused. In 1993 a new four channel sound system was installed which made use of all the existing speakers in the ceiling and behind the screen. In 2002 a subwoofer and 12 additional surround speakers were added.

August Aubert sold the theatre in the 1970’s and it went through a series of owners. A video store was added in the 1980’s. The current owners, Dirk and Jeri Reinauer bought the theatre and video store in 1992. Some of the seats in the theatre are the originals as is the Manley popcorn machine, which still puts out a great batch of fresh popcorn for every show.

In May 2012 the film projection system in place since 1952 was replaced with a new Digital Projection System. The most expensive upgrade to the theatre ever, and included a new screen, new digital projector, server and digital sound processor. Two new amplifiers were also added to accommodate the additional sound channels. The theatre now has an amazingly bright clear picture and 7.1 Dolby Digital Sound…and RealD 3D! The entire center section of seats was replaced with 16 recliners and 86 rockers in 2016.

For most of the year the theatre is open three nights a week (Friday to Sunday), and during the summer months it is open five nights (Friday to Tuesday).

Dirk and Jeri Reinauer would like to thank the people of Connell for supporting their local movie theatre!

The Sunset is an absolute gem! A perfect period piece from the 1950s and in remarkable condition.