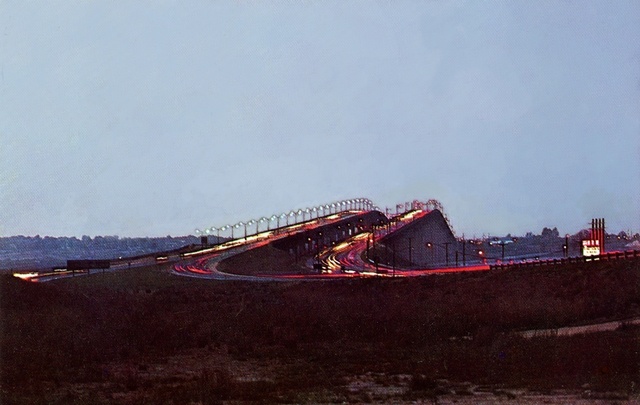 The Amboys Drive-In Theater was located in Sayreville, NJ between the very industrialized cites of Perth Amboy and South Amboy and was operated by Redstone National Amusements. It was opened July 11, 1957 with Hal Stalmaster in “Johnny Tremaine” & Cornel Wilde in “Beyond Mombasa”. It was operated by Redstone Drive-In Theaters. The strange thing about the South Amboys Drive-In was that is was located near, and completely visible from the very busy Garden State Parkway and Route 9 highways. As a kid I vaguely remember my parents taking us there to see “MAS*H”. I was a small child and didn’t understand it so I just fell asleep.

It was closed on February 13, 1979 with “Smokey and the Bandit” & “Almost Summer” and was replaced by the 11 screen Amboy Multiplex theater.

I worked at the Amboy’s Drive-In during the summer of 1969. There used to be a children’s playground, with rides, at the base of the screen to keep the kids amused before the feature started. By ‘69 the only ride that was still in operation was the merry-go-round. One of my jobs was to operate this amusement. We changed the marquee weekly and also repaired speakers and heaters. We also stood guard at the exit gate on RT 35 to discourage folks from sneaking in. We sat in a lawn chair sorrounded by PIC mosquito repelant smoke rings. At closing we directed traffic out and occasionally had to chase out couples who were otherwise occupied. Yes it did show porn in it’s declining year and it was not unusual to see cars pulled over on the shoulder to take a peak. The authorties got involved and the theater died.

It was open in th elate 70’s. By the time I stated going back and forth between NYC and PHila in 82 and 83 it was closed.

This opened on July 11th, 1957. Its grand opening ad can be found in the photo section for this theatre.

grew up in nearby Madison Park and some many movies there…remember the original Straw Dogs, was about 10 and went with my sister and her boyfriend…lot of violence for a young lad.

The Drive in closed the first week of January 1979. Construction started on the 6 screen Amboys Cinemas thereafter. The 6 plex opened Dec 7, 1979.

Final night of operation, according to the last known newspaper listing, was February 13, 1979 with “Smokey and The Bandit” and “Almost Summer”.

Those are very old movies. The advantage that the multiplex had over the drive in was privacy, as the drive in screen could be seen by motorists on the other side of the parkway.

Opened with “Johnny Tremain” and “Beyond Mombasa”.

Its time to demolish the multiplex and put up a 3 screen drive in back on this site. The time has come.