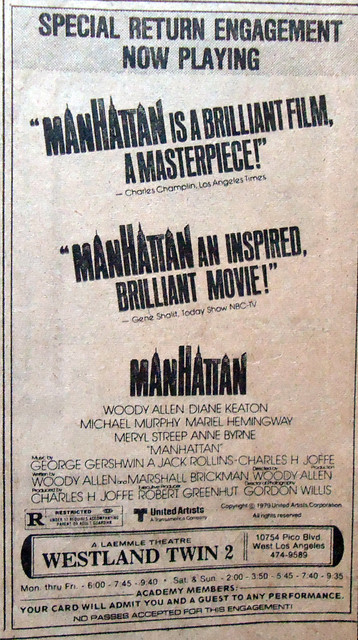 Taken over by Laemmle Theatres in 1976.

This little twin was located 2 blocks east of Westwood Blvd. on Pico Blvd.. This theatre was operated by Laemmle theatres as a art house. Before the theatre was there it was a restaurant, then Laemmle converted it into a twin cinema. It was a standard 70’s look with a lot of curtains. It was razed around 1986-1987, to make way for the Westside shopping mall. Landmark theatres put a 4 plex in to the mall, that shows art and independent films. The Westland was 2 ½ blocks from the Picwood Theatre. Note: most theatres along Pico Blvd. are gone now, only one theatre is still running on that street.

Like the Picwood, it was a theatre I was able to get to easily by Bus when I was a child. It was a 2nd run theatre for a while. I remember seeing double feature of “The Fortune” and “Smile” in 1975. Laemmle later took over and it remained as one of their theatres until it closed. Very tiny theatres but not as bad as the Cineplex in the Beverly Center.

Tiny, but significant. Smile and The Fortune isn’t a bad double bill…I saw The Man With The Golden Gun here, and wished I hadn’t—but it wasn’t the theater’s fault.

Remembering the Laemmle Westland Twins, I was just there a handful of times: “Cousin cousine”, “La cage aux folles”, and Universal’s 1984 re-releases of the Paramount Hitchcock films.

Loved this place. Also loved the courtyard with the St. Francis statue!