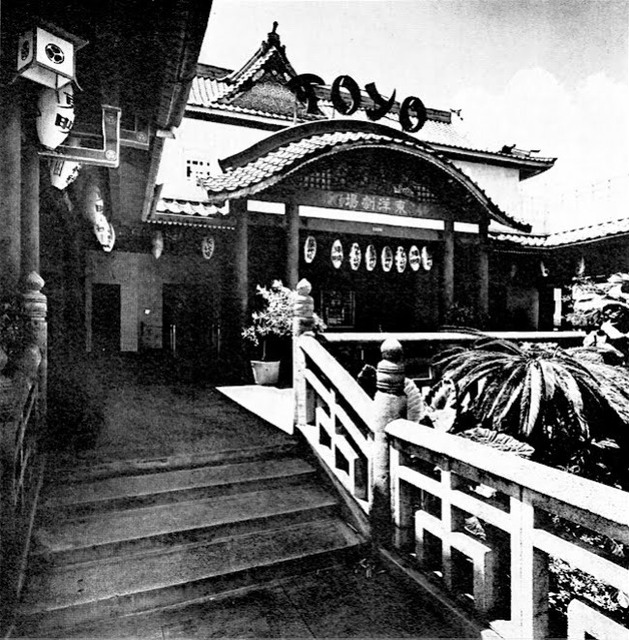 The Toyo Theatre opened June 16, 1938, designed by noted Hawaii architect C.W. Dickey. The theatre was located on College Walk near Beretania Street and served the Japanese population in Honolulu’s Chinatown. Following the attack on Pearl Harbor, the theatre was renamed Aala Theater on December 31, 1941 and presented English language movies only. It reverted back to the Toyo Theatre name after the end of World War II. The theatre presented both live shows and movies, though by the late-1960’s and early-1970’s it was showing adult movies.

It was listed on the National Register of Historic Places in 1982.

scenichawaii.org successfully fought to save the theatre from demolition. They probably have a lot of information on the history.

TC: I just visited scenichawaii.org and will look to see if I can find out any Hawaiian theatre history. I’ve been studying all of the Dickey Hawaiian theatres and am so sad that the Waikiki is now committed to the history books….and all for a Foot Locker and a California Pizza restaurant!

The Toyo Theatre was opened by the Consolidated Amusement Co. on 16th June 1938. It was aparently briefly re-named the AALA Theatre in 1949-1950.

It was the most beautiful theater that I have ever
been to. I really wish that they’d kept it up & restored it.
I have very good memories of watching Samurai movies there in the late 50’s, early 60’s.

There’s some good footage of the Toyo in the 1988 movie Aloha Summer.

Does anyone remember the name of the movie that played here as the second feature to the Kikaida 3D movie from the 70’s?

i used to go here when i was a student at the uh manoa. on tuesday, and i dont remember if it was weekly or monthly, they would have a new run. generally, it was a yakuza/samurai double feature. i would get a box of 6 wings from kentucky fried chicken(1.25$ at the time), the admission was 35 cents with student discount, and 25 cents for a coke. many times i would be the only one there. one time, a drunk was arguing with the movie, and he finally charged the screen. he tripped and hit one of the seats, and knocked himself out cold. coupla guys came and dragged him out. place was really beat up, but one could tell that at one time, it was a nice place. i also remember going to the kailua theater(we lived in lanikai) and the admission was 12 cents. one day, my friend swallowed his dime fooling around, and couldnt go in. we also went to the grand opening of princess theater when they first converted it to the 3 camera cinemascope.