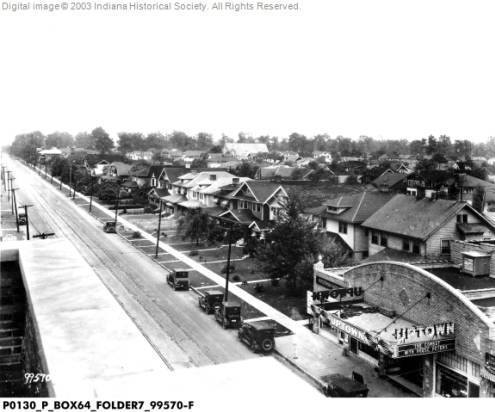 The Uptown Theater was opened May 29, 1926, designed by the firm of Rubush & Hunter (who also designed the Indiana Theater and Circle Theater in Indianapolis). It was a neighborhood movie house that held Saturday children’s matinees during the 1960’s. The Uptown Theater closed in the 1970’s and was demolished to make way for a parking lot.

Here is an early view of the Uptown:
http://tinyurl.com/l7oda

I’m sorry to know that the Uptown lost its “life” to a parking lot! I lived near there in the early 1970s. At that time, it became a venue for underground and foreign films there. I saw, among other films, Andy Warhol’s “Trash” and “Heat” (worried the whole time that we were going to get busted, since they were rated X). Anyway, I saw probably half a dozen interesting flicks I wouldn’t see elsewhere in Indy before I moved away. Rest in peace, Uptown.

In my youth I spent many a Saturday afternoon at the Uptown Theater in the 1950â€™s. Two hours of cartoon, and a feature for a quarter. The theater had penny candy, 5 cent Cokes, ten cent popcorn with real butter and a prize drawing between the cartoons and the feature.
Life didnâ€™t get much better than this.

I sat through about 6 hours of the original Batman serials in approx 1969-70. Me and my friend were the only two people in the theater when we were asked to leave so the projectionist could go home.