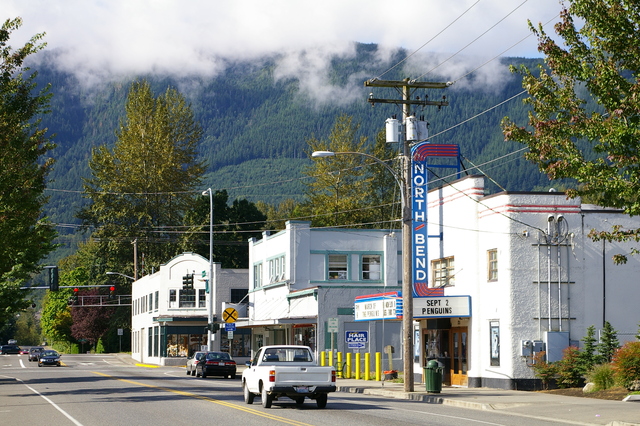 On April 9, 1941, the North Bend Theatre opened its doors with Jay Tew as manager. It was built by Emmet Jackson. Construction was done by William Blaisdell and Herbert Johnson; the interior design was done by W.E. Stoddard.

The original theater had 412 seats.

It has continued operating as an independent movie theater since 1941. Now, under new ownership, the theater has undergone a major renovation. Every part of the building was improved without sacrificing the distinctive character of this Art Deco gem. The theater reopened in December 1999.

For 30 years, the theater was operated by North Bend locals Harry and Helen Trostel. On Oct. 1, 1999, Brian and Karlene Slover purchased the theater to continue operation as a movie house. They closed for a couple months to remodel the building in keeping with the original style. The renovation of the building was extensive – new roof, new air conditioning system, new bathrooms, fresh paint, new windows, new doors, a replica of the original sign, more leg room in the auditorium, new draperies, new projection and sound equipment. You name it, it was done.

There’s still a crying room, prices are reasonable, they serve espresso drinks; there are speakers in the lobby and the restrooms so you don’t miss a minute of action.

The theater’s website features an entertaining news story from April 1941 about the opening of the theater.

This is a great looking old place
View link

I think the film is “March of the Penguins”. Probably too long for the marquee.

A recent article about the theater: View link

I have worked at this theatre since fall of 2006 (A little bit after the previous owner passed away and the theatre changed ownership) and it really is just the greatest place. The owner was awarded North Bend’s Citizen of the Year in 2010. The theatre shows a Christmas classics series every year as well as a fall classics series. First runs, independent and aspiring films, mountain films such as the Banff Mountain Film Fest, special needs films, birthday parties, and the occasional video game. There’s a The auditorium currently seats 275 and there is a portable stage. There are also big plans for this big little theatre in the works…

North Bend Theatre is for sale.

Moviegoers at a showing of “Frozen II” had a whole other adventure Friday when a misdelivered package forced the theater to evacuate, The Seattle Times reports.

The package, marked “highly contagious human substance,” contained urine samples meant for a Tacoma medical clinic about 40 miles away, KOMO reported. It’s not clear how it ended up outside the North Bend Theatre east of Seattle.

Someone found the package at 5:15 p.m. and opened it, discovering the dire warning and prompting a hazardous materials response by firefighters, who cleared the theater, according to The Seattle Times.

“Box has been isolated and one patient treated as a precaution,” Eastside Firefighters posted on Twitter. The person who opened the box was screened but no one was hurt in the incident.

“All is well,” read a post to the North Bend Theatre site, thanking firefighters and noting it would reopen Saturday. “There was no danger.”