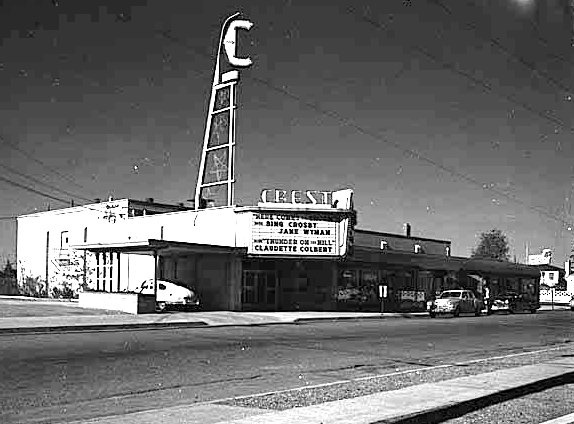 The Crest Theatre was built in 1949. It was located in the Shoreline district of Seattle, which since 1995 has been incorporated into a city. It was renovated by Seven Gables Theatre in Spring of 1979 and equipped with widescreen capabilities. It was one of the first theaters in the country to run “Close Encounters of the Third Kind” in 70mm, and was renamed Crest 70.

The storefronts were converted into a small cinema in 1979, and in 1980 the main auditorium was triplexed.

The theater offered bargain nights in the late-1980’s, and they became so successful that the owners decided to keep running “discount programming”.

Tickets are $3. It’s very much a neighborhood theater.

The Crest was renovated by Seven Gables Theatres in Spring of 1978 and reopened with the premiere Seattle 70mm engagement of “Close Encounters of the Third Kind” in May of that year. It bore the name Crest 70, along the lines of then-stalwart Seattle theatres UA 70 (70mm) and UA 150 (Dimension 150), touting its then-exclusive 70mm presentations.

Among its memorable showings were a 1979 70mm run of Walt Disney’s “Sleeping Beauty” for the first time in 20 years, the premiere engagement of Carroll Ballard’s “The Black Stallion,” and a repertory featuring 70mm screenings of “Days of Heaven,” “Camelot,” and “Hello, Dolly!” among many others.

The theatre storefronts were removed and gutted and converted into a small specialty cinema in 1979. The main auditorium was clumsily triplexed in 1980, destroying the presentation quality that had made the theatre such a success story only two years prior.

I am curious about the fate of the Crest with the impending demise of 35mm prints.

Great theatre still but I wish they would restore the original signage. I have seen many a film here over the years. Still attend often.

Are there any pictures of original Crest auditorium still around? The light fixtures are being used in later small theatres in complex I think. They always used a curtain in the day. Started seeing films there often from 1955+. Then there was competition with the bigger Northgate, Alderwood multiplex and Aurora Village multiplex and of course the Lynn theatre. Remember those?

Was at the Crest this evening and could find no indication of any major alteration to the design of the main auditorium. There are two smaller screens situated behind the original one, but their seating configuration is completely different suggesting they were later added on rather than divided from the original. The main auditorium appears to be pretty much intact. The venue as a whole could use some sprucing up, but the staff as well as the presentation in each screening room.

I think the original auditorium has been cut down in length to give room to the creation of the 2 newer small theatres. The original theatre was much longer and bigger. Was in it many times as a kid. The Crest is still one of the best theatres in Seattle. I also enjoy the Oak Tree 6, Majestic Bay and Edmonds. They retain a smaller classic theatre feel. The huge multiplex theatres leave me COLD.

Is the Crest located in Seattle, or is it actually in Shoreline?

It is 20 blocks North of the Seattle City Limits. It is in the City of Shoreline. Shoreline did not incorporate as a City until 1995. The mailing address would have been Seattle until that time with the theater actually located in unincorporated King County. The Crest is one of a very few theaters I never worked at in the Seattle area. I did live a half block away with a couple of roommates while attending college around 1981 or 82. It was great to have a discount house so close.

saw free solo here. it it now a discount house!