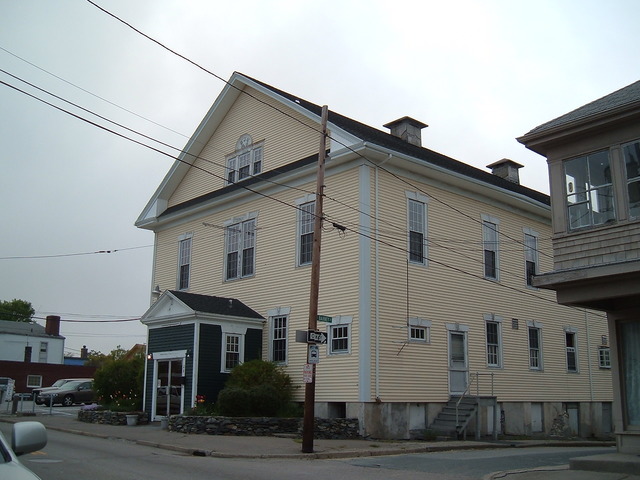 Located in the heart of Warren, the Capitol Theatre was actually the second floor hall of the Cercle Jacques Cartier, a French-Canadian benevolent and fraternal society. The front of the building has the inscription C.J.C. N. 5 1914. Evidence shows that the hall was used as a movie theatre in the silent era. It appears in the 1928 R.I. Directory as the Capitol Theatre, with the address of the C.J.C. When the Lyric Theatre was built around the corner (late-1920’s/early-1930’s?), that became the town’s exclusive movie theatre.

The hall has an old stage, a short balcony where a projection booth must have been housed (a vent hole in the ceiling can be spotted.) The hall was also used for social functions, weddings, dances, amateur theatricals, and other such events. Today it has been taken over by the very successful theatre company, 2nd Story Theatre. It draws patrons from the East Bay and Providence area. Roundabout-style seating has been installed and can accomodate about 130 patrons. A first floor restaurant makes it possible to have dinner before the show and then moving upstairs for the performance.

Additional information relating to the years of operation of the Capitol Theatre in the C.J.C. would be appreciated.

Here is a photo of the former Cercle Jacques Cartier which used to house the Capitol Theatre on the second floor many decades ago. The building is now owned by 2nd Story Theatre.

Here is a link to the CT page for the Lyric Theatre, about a block from the Capitol. More precise information on both these Warren theatres and their histories would be appreciated.