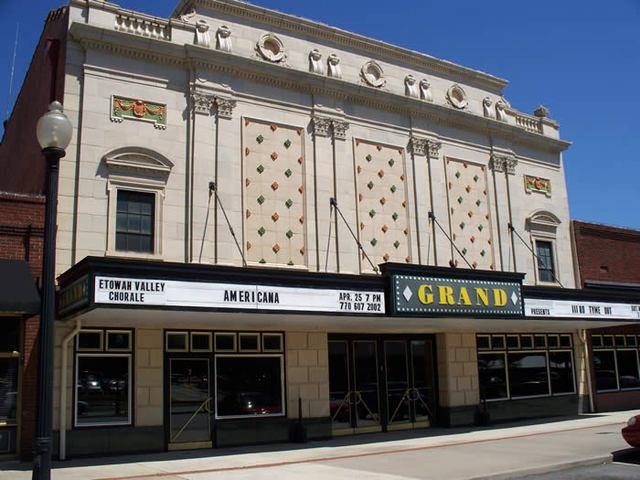 Opened in 1929 as the Greenwood Theatre. It was a very elegant theatre that served as the cultural centerpiece for Bartow County. The original marquee was destroyed from the weight of a heavy snow storm in the 1970’s.

It has been completely restored as a performing arts center.

Re-named the Grand Theatre from at least 1941 according to listings in editions of Film Daily Yearbook.

Dear Cinema Treasures,
I am the current program coordinator at The Grand Theatre in Cartersville, GA. The Grand was a movie house from the late 1920’s until 1977. Today it is an active live-performance theatre with educational programs, an annual entertainment series, summer camps for children, and frequent rentals by local groups of all kinds. For a current listing of events, visit our website, www.thegrandtheatre.org or e-mail us at

Some updates for your statistics: It currently seats 508. It was once a part of the Martin Theatre Chain.
Sincerely,
Terri Cox

In the Beginningâ€"From Vaudeville to Motion Pictures

In January of 1910, Mr. J.W. Smith of Atlanta announced that he would soon be constructing a new Opera House at the corner of Wall Street and Market Streets in downtown Cartersville, Georgia in the old Exchange Hotel. In November of that year, The Greenwood Theatre was opened. Patrons entered from Market St., now known as Cherokee St. The theatre, which occupied the second floor of the building, seated 800 and featured a 20-foot by 50-foot stage.

In January of 1911, a contest was held in which the stylish young ladies of the town sought to find a new name for the theatre. The winning entry was Grand Opera House, suggested by Miss Emily Daves.

Performances at the new opera house included live shows such as orchestra concerts and plays by community theatre groups. Also featured were silent â€œmoving picturesâ€, and there was a different show each night. Often Miss Marilu Munford, a local pianist, accompanied the silent movies.

On November 15, 1923, tragedy struck when a fire broke out in the stable located adjacent to the opera house. The entire block was destroyed, including the theatre. Mr. Germain, the theatre operator, also resided in the building, and was able to escape unharmed with his wife. The theatre was rebuilt on a smaller scale using some of the outer walls of the building which were still standing, and it reopened in 1924. It was that year that it began to bear the name, The Grand Theatre.

With the new name came new stars and constant improvements in theatre technology. Techniques in lighting, costume, and makeup gave a more professional look to the movies. Often seen on the screen at The Grand during the 1920â€\s were movie stars such as Charlie Chaplin, Mary Pickford, Loretta Young, Rudolph Valentino, and Charlie Chase.

The first â€œtalkieâ€, or motion picture with synchronized picture and sound, debuted on May 9, 1929. It was called â€œSyncopationâ€ and was advertised as the entertainment sensation of the age.

In 1930, a newly designed faÃ§ade was built on the theatre featuring the Beaux-Arts style of architecture with Corinthian columns, urns, swags, and an elaborate marquee. The interior was appointed with plaster relief carvings, stained glass skylights, and terrazzo flooring. A small stage remained for occasional live performances, but motion pictures were the main attraction. It was advertised as offering new air conditioning, cushions on the seats, a new screen, and the latest talking devices.

In the 1940â€\s, film star Lash Laroo appeared in person at the Grand, as did western stars Kitty Wells and Little Beaver. Local resident Bonnell Cox remembers standing in line to be photographed with Smiley Burdette after his appearance promoting one of his western comedy roles.

Throughout the years, the Grand was the place to go for family entertainment. On Saturdays, the house was filled every weekend with children who came to spend the day. For the price of a quarter, a kid could see a cartoon, serial, a western, a newsreel, and a main feature and still have money left over for popcorn and a soda. Most patrons had their favorite seats and many have fond memories of spending the day with friends, while occasionally getting into trouble from the theatre manager, Mr. Anthony, who ruled the Grand with an iron hand.

Late in the summer of 1977, the Grand Theatre, then owned and operated by the Martin Theatre Company, presented its last movie performance with â€œSilver Streakâ€ starring Gene Wilder and Richard Pryor.

From Movies to Live Performance
The Grand Theatreâ€\s programming was kept alive between 1978 and 1983 by a local theatre group called The Pumphouse Players. Cartersville native William Brown served as manager for The Grand, bringing in shows including rock and roll bands, beauty pageants, and plays. The Pumphouse Players performed plays including â€œArsenic and Old Laceâ€, â€œThe King and I,â€ and â€œOklahomaâ€. They mounted a â€œSave the Grandâ€ campaign to make the community aware that the theatre was a local historic treasure, well worth saving.

The campaign was successful as the Grand Theatre was purchased by a local resident and slated for a complete renovation. In 1988, Don Kordecki was hired as manager of the renovation project. The theatre was completely converted from movie theatre to live-performance venue including stage expansion, fly system, orchestra pit, lighting and sound equipment, and acoustical tiles to enhance sound. The Grand Theatre re-opened as a live-performance venue on May 19, 1989 with a production called â€œGallavantinâ€\ at the Grandâ€. It was managed by The Etowah Education Foundation for the next 11 years.
The Grand Theatre Opera Company and The Pumphouse Players produced shows featuring local performers as well as professional singers and actors.

In 1990, a two-week summer music theatre camp program was started for the youth of Cartersville and Bartow County. It was directed by George and Jonalyn Bew and Don Kordecki. Students learned not only how to sing and act, but how to express themselves with confidence and the wonderful camaraderie of a cast. This program has now expanded to include camps for four age groups, each culminating in a stage performance. The senior high group has presented many well-loved musicals including â€œGrease,â€ â€œFiddler on the Roof,â€ â€œBye Bye, Birdie,â€ â€œLiâ€\l Abner,â€ and â€œOklahomaâ€.

Today, the Grand Theatre serves as a cultural center for the community. The summer music theatre program now serves over 100 students per year. The Grand hosts school groups all during the year for educational performances. Groups also come individually and learn about areas of the school curriculum through drama, music, and dance. An annual Entertainment Series is presented featuring professional performing groups of many genres including country music, orchestral concerts, comedy, drama, musical theatre, and bluegrass.

The Grand Theatre also provides a venue to many community groups who rent the theatre for their performances. Theatre personnel assist in the productions and advise clients on how to make the most of their experience.

An extensive renovation in 2005-2006 gave The Grand a beautiful new look, harkening back to its original art deco look of the 1930â€\s. Upon entering the lobby, you see a beautiful gold â€œGâ€ inlaid in the terrazzo floor. To the right, you will see an expanded concessions area, and adjacent to that, The Encore Room— The Grandâ€\s reception hall.
All restrooms have been refurbished with beautiful black and white tiling and accommodations for more patrons. Facilities for handicapped visitors have been expanded and improved. The dÃ©cor of the lobby now features detailed wood paneling and wooden columns lining the walls. Coved lighting adds an elegant feel to the room. Additional terrazzo flooring was added to the upper lobby floor.

Many improvements have also been made inside the theatre. A new color scheme features burgundy and gold designs on the walls, carpets and seating. The house area ceiling has been replaced and changed from white to black. Lighting in the ceiling has been moved and lowered to provide maximum use of the lights. This required building a gondola and catwalk for access to the fixtures. Additional lighting has also been added to the side walls to give more depth to the lighting affects used on the stage apron. The walls surrounding the entryway and balcony areas are now inlaid with beautifully detailed woodwork. The new seats are roomier and more comfortable. All in all, the theatre gives an elegant atmosphere to each performance.

There are two listings for the same theater for some reason.

The Greenwood Theatre was first operated by Manning and Wink Enterprises. The architectural firm Daniell & Beutell was also responsible for the design on the Madison and Buckhead Theatre’s in nearby Atlanta. GA.

The theatre originally housed a small Robert-Morton 2Manual/4Rank pipe organ which was used briefly in the early days of the theatre to accompany silent films.