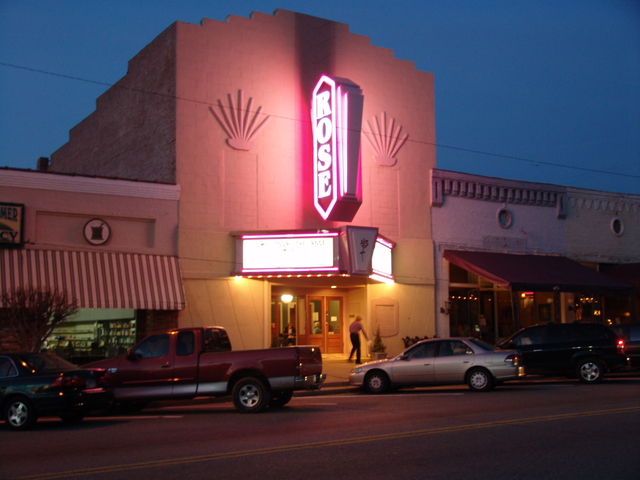 The Rose Theater is truly the gem of Forsyth, GA. Located right on the courthouse square, it is Forsyth’s one and only old theater. It is very small, with little ornamentation. In the 70’s, the roof was torn off to make an open-air bar, thus destroying any ornamentation that was there.

Now, the Backlot Players (a non-Profit community theater group owns it). My grandmother went to the local high school and can remember going to movies there when she was young. It is currently in a state of restoration, with a temporary stage and fold-up chairs in the audience, but donations are flowing in and we will soon carry out what we call “Phase II” of the restoration. This will include a real stage, dressing rooms, and seating. We are very proud to have the Rose in our town and hope to see it there forever.

Here are a couple of recent photos of the Rose. Wasnâ€™t able to get a glance on the interior but the exterior looks great! Does anyone know about when the Rose opened and its original seating capacity? I am pretty sure that the Martin Theatre circuit operated it up through the 1960s.

The Rose Theater is owned by The Backlot Players, Inc. We are a non-profit Community Theater Organization. Our Theater seats 150 for live shows & 132 for movies. The building was originally buit in 1904 & was used as a warehouse & grocery store till the 1940s when it was used as a Movie Theater until the late 1950s. It was unused until the 1980s when it had no roof & was used as an Ampitheater/Bar known to some as the Topless Bar! Most recently, in 1999 it was donated to The Backlot Players by Dr. & Mrs William Cummings,then in 2003 & 2007 The Backlot Players renovated the building with a new roof, plush seating and State of the Art Lights, Sound & Projection Systems. We are proud of our Theater! Come visit with us! www.thebacklotplayers.org 478-994-0443

I have seen the Rose Theater from the outside, it truly is a remarkable show place, Forsyth you did good.