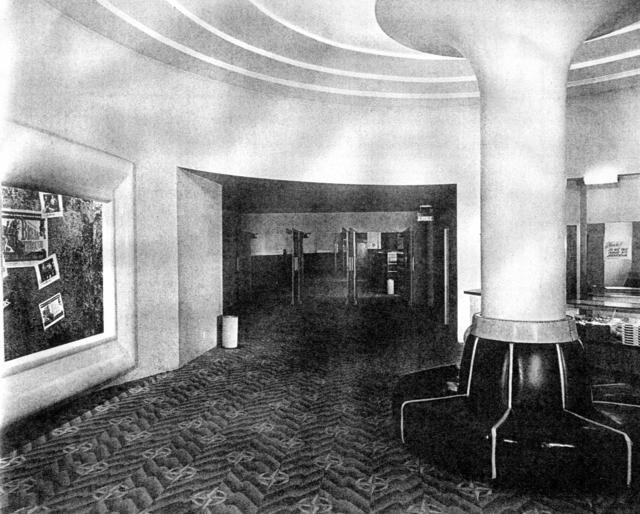 Built as a single-screen theatre by Redwood Theatres chain. The Ukiah Theatre was opened on September 8, 1948 with Cary Grant in “Mr. Blandings Builds His Dream House”. This theater was designed in Streamline Moderne style, but the interior of the original theater has been removed and the walls covered in red curtains.

The main auditorium had its stage removed and was split in two in the late-1960’s or early-1970’s. In 1980, two screens were added, and again, in 2000, another two were added, bringing the total to six screens.

The large, stylized pylon sign in front of the theater is one of a small handful of landmarks in Ukiah to be officially recognized and given protective status.

My first job: Back in 73'-74' I was nine years old and bored. I walked into the Ukiah theatre while it was closed and asked the manager for a job. He handed me a coffee can and a putty knife and said scrape as much gum and candy off the floor as possible. I remember filling that can more than a few times.
I was paid in free passes and soda. It felt like I did that job for a year; it was probably more like a few weeks. I was very proud that I could take my family to the movies with my pay. I love that theatre.

Here is a contemporary view:
http://tinyurl.com/dgwzfp

The trees don’t seem to be too oppressive to the view at this point in time. My GoogleEarth pics should be on the map shortly…

Less than 5% of the original interior survives.

I spent the happiest hours of my childhood and adolescence (1955-1970) in this theater. After not having been there in over forty years, I attended it about a year or so ago. Although I miss the experience of a single-screen venue, I was pleased to see how the theater has been cared for.

I heard that the city owned this building. Regal must lease the place. There is an apartment upstairs where the owner of Redwood Theatres, Charles Mann stayed when he visited his NorCal theaters in the 30s-40s. A couple of them still exist such as Noyo Theatre, Fortuna, & Eurika. Hope that Regal treats the wonderful old building with respect.

Actually the place was remodeled in the early 90s and that is when auditorium 5 & 6 were added. There was another remodel in 2004 but no auditoriums were added. They just added stadium seating to all the auditoriums in 2004. They also got rid of the arcade in 2004. The tower on State street, the outer walls of auditorium 1&2, and the “mushroom” pillars that are in the snack bar are all historical pieces and are not allowed to be altered. Before the remodel in the early 90s the pillars were put back to back and were in the center of a round snack bar that was centered in the front lobby. I worked there for over a decade and am familiar with the history. It is not owned by the city, it is still owned by George Mann. When George Mann sold Signature Theatres to Regal Cinemas he kept the locations in Montana and refused to sell the building located in Ukiah. Regal leases it from him. This was his favorite building and he would not part with it. At least this was still the case when I left in 2012. The old wooden stage (“Back stage” as we call it) is still there behind the screen of #1 and #2. There is also an apartment above the front lobby that used to house actors and actresses but is now occupied by the former GM’s husband. At least he still lived there in 2012.