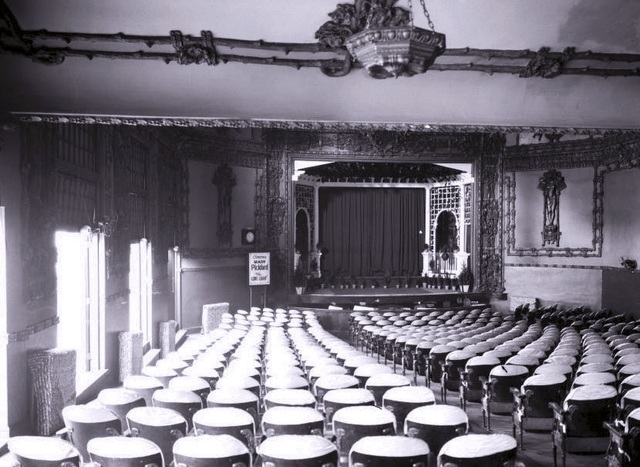 The Majestic Theatre in Ashville, NC is another theatre that I found on the web. It was opened March 24, 1913. It became the Paramount Theatre June 9, 1929 and was operated by Paramount pictures Inc. through their subsidiary Carl Bamford. The Paramount Theatre was closed in 1959.

This theater stood at the corner of Market and College. Although it has been demolished you can make out the outline of the balcony on the one remaining wall that touches the building that was next door.

The Paramount was know as the Majestic in its early years.

Mark in NC: When in Asheville again, I shall visit College and look for the “you can make out the outline of the balcony on the one remaining wall that touches the building that was next door”.

The Majestic Theater, at the corner of College and Market Streets in Asheville, was designed ca 1912 by Smith & Carrier, Architects, who had their offices on an upper floor. The Majestic Theater was initially operated by the Asheville Amusement Company, with major stockholders S. A. Lynch, A. H. Carrier, and W. M. Robertson (Carrier’s brother-in-law), and featured vaudeville acts as well as motion pictures. Carrier, my grandfather, had a window cut in his office wall so he could watch performances.

Smith & Carrier moved their offices to the Knight-Overland Building on College and Valley Streets shortly before the firm was dissolved on Smith’s death in 1924.

At some time between the 1920s and 1930s, ownership of the theater changed, and it was renamed the Paramount Theater, showing second-run films and on Saturday afternoons westerns (9 cents for children).

I think there’s something off about the photo used as the related web site in the description. The theater in the photo is obviously old, not from 1930, despite what its caption says, and it doesn’t have the name Paramount Theatre on it. There’s just a banner reading “Paramount Special.”

Some of the information in Jdr2010’s comment above is also on this web page about architect Albert Heath Carrier, provided by the North Carolina State University libraries. I think it’s safe to presume that it’s accurate.

Multiple sources say that the Majestic became the Paramount. The book Asheville: A Postcard History, by Sue Greenberg and Jan Kahn, gives the Majestic’s address as 118 ½ College Street, the same as the 1951 address of the Paramount.

Google Maps actually gets closer to the actual location of the theater (College and Market Streets) using the address 120 College Street than it does with the correct 118 ½ address. The address of 26 College currently listed fetches a spot several blocks away.

Chuck do you live here in Asheville?

No seating capacity is given for the second Princess. It must have been at either 120 or 122 E. College by the modern numbering system. Old address 28 E. College has to be where the parking lot is now. Why Docsouth gives 30 E. College as the address of the Paramount I don’t know, but neither of the buildings east of the Majestic could possibly have held a theater of 1000 seats, or even the 750 the Paramount had in 1958.

I’m sure that the theater’s history given in the earlier comment by AHCJDR1912 (a grandchild of one of the theater’s architects) is accurate: located on the corner of College and Market; designed around 1912 by Carrier & Smith (Albert Heath Carrier and Richard Sharp Smith); opened as the Majestic; renamed the Paramount around 1930. The web site of the Biographical Dictionary of North Carolina Architects and Builders agrees.

The address for this theater should definitely be changed to 118 E. College Street. Google Street View is already fixed at the correct location, but could be panned left a bit (left click, hold and drag.)