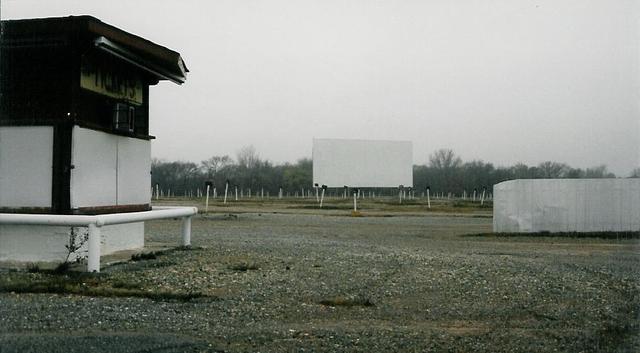 The Riviera Drive-In was opened on August 24, 1967 with a triple bill program “They Came From Beyond Space”, “The Terrornaughts” & “The Projected Man”. The screen was severly damaged in a storm in 1999. The theatre closed after that. The rest of the the drive remained intact although shabby until it was eventually demolished. It was a single screen with a 700 car capacity.

The Riviera, still open on the weekends in the winter of 1994:
View link
View link

This lind shows the ruins of the former Riviera Drive-In,
http://www.roadsideoklahoma.com/node/151

This theater looks like it’s worth fixing the screen tower & reopening. Call Selby Screens and get a quote for making a new screen tower.

Screen blew down during winter of 1999, theatre did not reopen.

The reason the screen blew down, was that it was constructed of oilfield drilling pipe. The only problem was that in 1967, no one bothered to weld caps on the TOP of the pipe, and they basically stood with water in them for 32 years…time took its toll and with a good wind, down came the screen.

I did have the privilege of being the Union projectionist there in 1985 and part of 86. If you want to see the truly sad end for the drive in, there is a great set of pictures of its stripping and vandalism here:

Truly a sad end for a once great, but tawdry drive in. I am sure there are lots of people in Oklahoma City who remember seeing such wonderful films as, “Hell’s Angels unchained,” or “Glory Stompers” in the late 60s to “Candy stripe Nurses” in the late 70’s…

No visible evidence of the drive in remains. It’s just an open field.

Anyone have any pictures of the place now