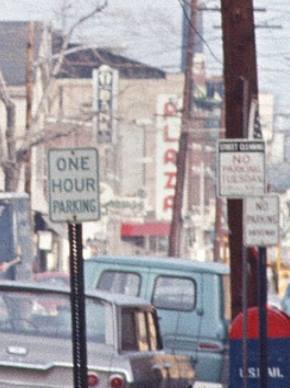 See/listen to the attached link:

http://memory.loc.gov/ammem/index.html
type Plaza Paterson in the search box and then click on “There was a lot of Italian tradition in the city.”

In about two weeks, the only remnant of the old Plaza Theater on Union Avenue will be a strange-looking, 4-foot piece of decorative porcelain that once adorned the theater’s art-deco exterior.

Built in the early 1920s and the host to generations of moviegoers before closing more than a decade ago, The Plaza is slowly being demolished to make way for an auto-parts store. Little was left of the theater even before the wrecking ball took aim. It was gutted years ago after the theater was turned into apartments and a fast-food joint.

But two brothers, who own the property and are demolishing it themselves, recently unearthed the porcelain piece under a granite facade that had been put over the original exterior. The piece has gold vases and harps carved out of a blue background.

“We have no idea what we have here,” said Anthony Lucci, who runs ALucci Development with his brother Marco. “But everybody who passes by asks us how much we’re selling it for. So we thought this could be a great auction item.”

They want to sell the piece to resurrect their old Boy Scout troop. Twenty years ago, when the Luccis were Scouts, Troop 39 had a fairly active membership. But like the Plaza, the troop has been defunct for years.

“The kids in this city don’t have the same opportunities we had,” said Anthony Lucci, who still lives in Paterson. “They should. ”

The Plaza certainly has sentimental value for scores of current and former Patersonians. During most of the 1950s, The Plaza was one of 11 movie theaters in Paterson, which today has none. The Plaza was a magnet for the residents of Paterson’s Hillcrest and Totowa neighborhoods.

“As a kid, my mom would give me money on Saturdays and my brother and I would see matinees,” said Ed Smyk, the Passaic County historian. “You didn’t have to go downtown to see a movie. It was a neighborhood theater.

“The monuments of my boyhood are vanishing,” he said.

Longtime city resident Tom Evans remembers when the theater would have weekly “Dish Nights” when the owner would give out a piece of dinnerware to every moviegoer to drum up business on slow nights. “Some people would have a whole set,” said Evans, 64.

The demolition will end up costing the Luccis very little. The roof of The Plaza was made of chestnut wood, which is hard to find these days. The brothers are recycling the wood and selling it along with all the scrap metal.

During the demolition, old-timers have come up to the Luccis just to talk about their memories of the movie house.

“We’ve been out here for a few months and we have so many people telling us, ‘When I was a kid, do you know how many movies I saw here?’ ” Marco Lucci said. “We have old men coming up to us saying they met their wife here. Some of them take a brick back home as a memento.”

2 PHOTOS – ELLIE MARKOVITCH/SPECIAL TO THE RECORD

1 – Eugene Clay, above, moving art-deco stones found in the Plaza Theater in Paterson, which is being demolished to make way for an auto-parts store.

2 – Below, the theater building being torn down. The early-1920s building was altered years ago to accommodate apartments and a restaurant.

I took pictures of it while it was being torn down…the interior…lots of memories there…it was the neighborhood theater, was there every week…in ‘73 saw all 5 Planet of the Apes movies…..

does anyone have any pics at all of the Plaza while it was still up??

Worked at this theater as the nighttime usher from 68-69. Only 16 at the time and I remember carrying the cases of the new movies of the week upstairs, they were heavy. Hecht & Conklin were my bosses. Monday night was dish night. Tuesday had to change the posters outside for the next movie . Once a month was Italian night , live show & movie. Saturday afternoon which I worked about 3 times were the kids and mostly Godzilla movies . Got a few posters for the girl I was dating at the time. And I got to see a number of great movies back then