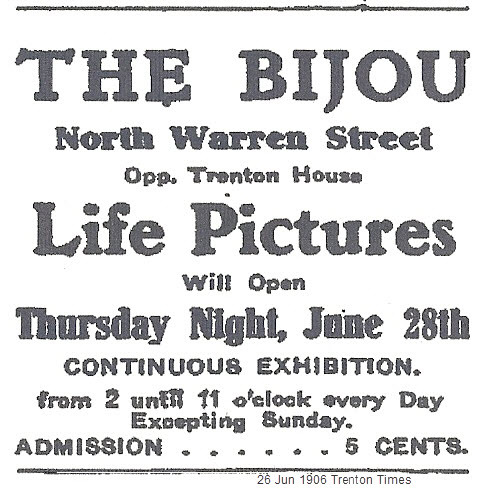 Small neighborhood theater listed in the 1951 FDY. The Bijou Theater has served as a church since closing in the early-1960s.

This is one of the few theater buildings left in the capital city of Trenton. It has been a church since it closed around 1960-61. The building is triangular and features a balcony. It opened in 1905.

Listed on page 126 of the Trenton City Directory under “Moving Pictures”. Address is given as S. Clinton av cor Woodland Ave.

The August 28, 1915, issue of trade journal The Moving Picture World said that contracts had been let for the construction of the Bijou Theatre at Clinton and Chestnut avenues in Trenton. The owners were Hildinger and LaMonte, operators of several theaters in Trenton. The $20,000 project was expected to be completed by November 15. The plans were drawn by local architect Frederick Slack.

The Bijou was Charles Hildinger’s (in partnership with C.C. Cutler)1st theatre which opened June 28, 1906 at 23 N. Warren St. In 1909 it was moved, under the name “The New Bijou” to the Chestnut/Clinton location and managed by Russell Lamont. It appears the original Bijou stayed open for some time and was managed by J. E. McClurg.

In 1915 Hildinger and LaMonte contracted with James Morris & Fred Parker to rebuild the Bijou at the Clinton address for $20,000 to be completed by November 15.