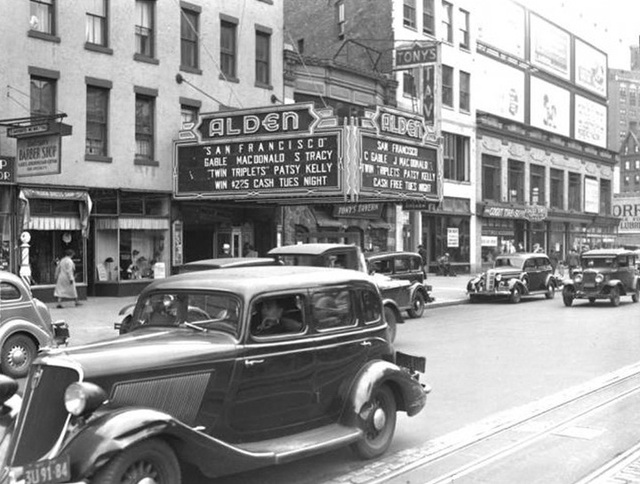 A long-time beloved Upper West Side movie house, the Alden Theatre opened in 1931, and shut its doors as the Regency Theatre after 68 years of operation on March 4, 1999 with Cate Blanchett in “Elizabeth”.

For many years the theatre featured film repertory programs curated by Frank Rowley (who would later move onto the now-shuttered Biograph Cinema on W. 57th Street near Broadway) and, upon purchase of the theatre’s lease by Canadian-based theatre chain Cineplex Odeon, became a first-run house, initially showing a combination of art-house and major release studio films. Despite its petite size, the theatre had a quaint, but comfortable balcony.

When the Loews Lincoln Square Theatre, a well-designed megaplex, opened in 1994, however, the Regency Theatre found itself in what proved to be a losing battle for major studio films and focused almost exclusively on independent and foreign films, such as “The Opposite of Sex”, “I’m Not Rappaport”, “Pecker”, and “Afterglow”; and often for long runs.

In November of 1998, the Brandt Organization, which owned the property that housed the Regency Theatre and its other tenants, including a Italian restaurant of long standing, announced their plans to clear the property.

Many expected a mixed residential/retail property of some 20 floors to occupy the site; instead a single-floor Victoria’s Secret was built, adding spice to one form of love but dulling the amour of those who made the Regency Theatre a true Manhattan institution.

Frank Rowley was one of the great contributors to the New York revival house scene of the 70s and 80s.

A bit aloof and serious but nice when you approached him to ask about upcoming festivals.

He had a wonderful evening with Robert Wise who was with Portia Nelson at the Gramercy. One of the last evenings in NY with one of the giants of the studio era.

And those summer MGM festivals were out of this world. But on the weekends you had to get there very early or end up on the standby line which was almost as long as the ticket holders line.

The Regency was one of the best things about New York for movie lovers during those decades.

Loved this theatre in the mid-1970s, it always had a fantastic slate of great old Hollywood films. Saw Waterloo Bridge, Philadelphia Story, Cat On a Hot Tin Roof, Unfaithfully Yours, among many other great movies. I love opera and I also remember seeing Interrupted Melody here, about the opera singer Marjorie Lawrence. Fabulous theatre.

When Cineplex Odeon took over the older chains such as RKO-Stanley Warner-Century (owned by the Almi Group, a company known for art house movies and tv shows) as well as Brandt Theatres and Plitt, it marked a milestone for the Canadian theatre exhibitor as it expanded to other states two years after the merger of Cineplex (which owned a 14 screen theater in Beverly Hills in the USA) and Canadian Odeon theaters. It became even bigger when it merged with Sony-owned Loews Theatres 11 years later until the combined company filed for chapter 11, unlike AMC, which bought the company five years later from Onex.

The Regency is one of the repertory movie theaters of the past that is highlighted in my recently published book, “Repertory Movie Theaters of New York City: Havens for Revivals, Indies and the Avant-Garde, 1960-1994.” It’s listed in Amazon and www.mcfarlandpub.com.

most memorable time was being introduced to films of Preston Sturges and the film Holiday with Cary Grant and Katherine Hepburn. the revival houses of the sixties through eighties were great.

Spent many hours in that theatre watching all the classic bogart films, astaire and rogers, dietrich. wizard of oz on the big screen. some of my most cherished memories. we need another movie house like this, people still love the old movies. no netter place to watch the mgm musicals. very magical place if this is what you loved. 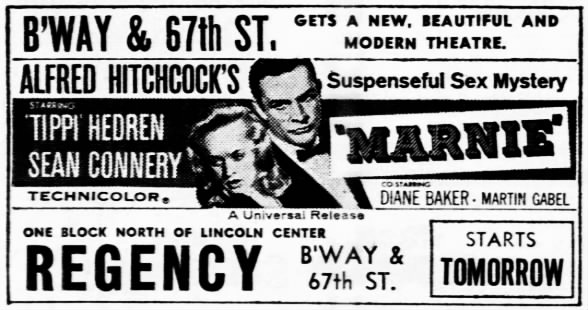 When Loews Lincoln Square opened in 1994 the Regency Theatre found itself in what proved to be a losing battle for major studio films.