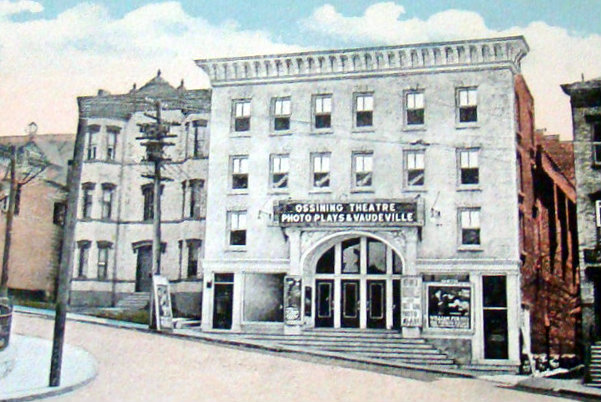 Originally opened as the Rowe’s Ossining Theatre on September 21, 1915 and was designed by architectural firm Applebree & Gowan of Ossining. It had 1,220 seats. It was re-named Victoria Theatre on August 20, 1917. By 1933 it was operated by Fox Theatres and had 962 seats. By 1935 it was listed a (Closed). By the early-1940’s was operated by the Skouras Theatres Corp. chain through to the 1960’s. It was remodeled in August 1962 to the plans of architect H. Tenebaum of New York. The seating capacity was reduced to 724. It was equipped with Simplex projectors and Peerless Magnarc lamps.

The Victoria Theatre was last operated by United Artists and was demolished in 1972.

Became the Victoria Theatre on August 20, 1917 under Harry L. Newman who played most films at ten cents but 15 cents for pictures worthy of patrons' extra nickels.

ADVERTISED AS ROWE’S OSSINING THEATRE WHICH OPENED ON SEPTEMBER 21, 1915

Prior to Skouras operating this theatre, it was advertised as the Fox Victoria Theatre.

The October 17, 1914 issue of Real Estate Record and Builder’s Guide had a notice announcing the contracts for an expansion and remodeling project for a theater and office building for James H. Rowe at Ossining. Plans were by local architects Applebree & Gowan. As near as I can figure, the theater was added to the existing office building at this time. The project was budgeted at $35,000.

The August 15, 1962 issue of Motion Picture Exhibitor noted that the Victoria Theatre in Ossining had just been remodeled for the Skouras company. The $100,000 project had been designed by architect H. Tenebaum of New York City. The remodeled house seated 724.