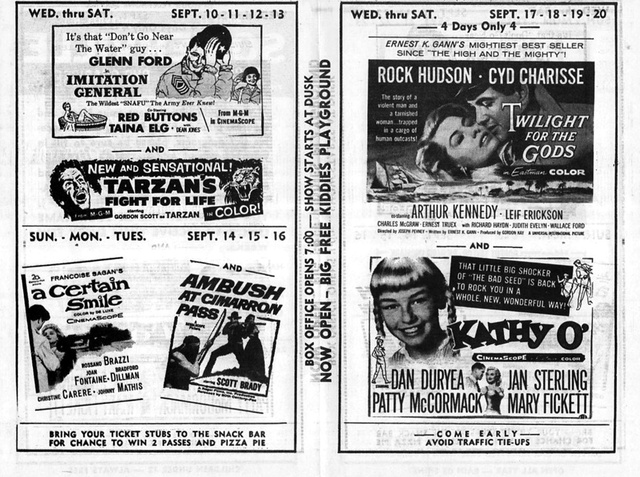 The UA Somerville Drive-In was opened August 19, 1954. Another UA outdoor that has gone to drive-in heaven.

I remember going here as a kid; saw some of my first movies here.. My dad took me to a few movies that were pretty inappropriate for my age; but still — a lot of great memories here.

I remember in the winter, when the leaves were off the trees, I could see the screen from my house.. I know plenty of people probably thought it was a blight, but not me…!

I remember the last time I went, sometime in 1990, right before closing, the snack bar area and the speakers were in pretty lousy repair — but they had introduced the concept of broadcasting the sound over the radio.. Saved us some mosquito bites (a big problem at this place in the summer!) but still wasn’t the same experience!

Last went to the site in winter of 2003.. The screen was gone, and I don’t think I could find the entrance from the highway.. but you can (could?) get in from the back on a back road — as kids, we entered the grounds on bikes after the closing.. Yep, we weren’t supposed to, but there was something amazing about having that whole place ‘to yourself’, movie running or not!

Last time I checked, the parking lot and speaker stands were still there, in late 03.

Not sure what’s left of it today – could be completely gone, knowing the way that area is expanding these days.

One thing I remember most was the sign.. The huge neon letters were visible for quite a ways on Rt. 22.. Again, probably something considered hideous today, but was great as a kid.. Something from a bygone era, just like some of the small motels and diners that used to be found around the theatre.. Those are probably gone now, too.

Although I long assumed the Somerville Drive In was no more, I only confirmed my suspicion last year when I opted to drive that stretch of US Route 22 instead of taking Interstate 78.

The last time I was at the Somerville Drive In was 1969. The absolute last film we saw there was WHERE EAGLES DARE. My parents bundled us into the station wagon and off we went. Back then, I thought it was the coolest thing to watch outdoor movies.

In those days, the area surrounding the drive in was not cluttered with corporate complexes. The area in front of the screen had a playground. There was also a train ride that chugged along a short stretch of track along the eastern side of the complex. By 1969 the train was no longer running.

Unfortunately, the drive in was the only way my parents could get out to see a movie when they a bunch of noisy kids in tow. I remember seeing several James Bond and Elvis movies there as well. My favorite part of the adventure were the intermission advertisements and ads for the snack bar.

As with other drive ins, it was sad to hear of Somerville’s closing.

Alas, the Somerville Drive-In is now a golf driving range complete with a small miniature golf course near the entrance. The entrance drive, though repaved, is about the only thing that vaguely appears the same. Over the years I have occasionally checked internet aerial photos of the site and watched it transform from an abandoned drive-in movie complex to a golf course.

“There was also a train ride that chugged along a short stretch of track along the eastern side of the complex. By 1969 the train was no longer running.”

It is interesting that the train ride was defunct as early as 1969! When I visited the theater, shortly after it had closed forever, the miniature locomotive was still parked under the movie screen! Although the passenger cars it pulled and all the miniature RR track had been removed.

I often wondered whether some railfan had salvaged all of the train ride except the locomotive. Because at the time I visited, the place was still otherwise intact; it was closed, but the marquee, screen and concession stand were all present and in decent shape.

I don’t know how many of these elaborate UA drive-in’s existed in NJ (they are all gone now) but there were at least four that I know of. I believe they were not built by U/A originally but were acquired by UA as a chain probably in the late 1960s or early 1970s (?) The family that built them I think was Appleman.

In addition to the Somerville Drive-In, it’s sister U/A Drive-in’s the Turnpike (East Brunswick) and the Plainfield-Edison (Edison) each had identical miniature train rides rusting away in the weeds when I visited those locations right before they went under in the 1980s.

I wrote an article about the UA Drive-in miniature railroads that appeared in MODELTEC magazine in August of 1996. The article was called Lost in NJ. My pen name is Ray Haigh.

Thanks Rick,We had the SKYVIEW Drive-in here in Augusta it too had a little train for the kids.Bet quite a few did.

Looks like the Branchburg Family Golf Center is at this site now.

I also remember going here as a kid, but that was in the 50’s. The only title I can remember seeing was The Guns of Navarone, and I think most of the others we saw were war movies also. They always showed double features but we could never keep awake for both movies. I will never forget the countdown to the second show with the cartoon guy constantly eating.

This opened on August 19th, 1954. Grand opening ad in the photo section.