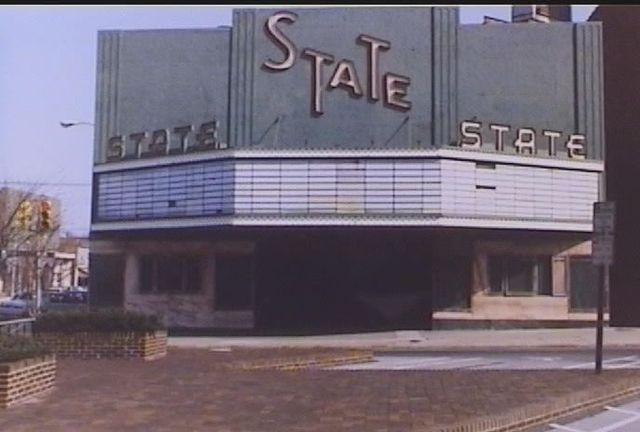 The State Theatre was opened on March 6, 1936 with Bing Crosby in “Anything Goes”. Designed by architect Erle G. Stilwell, the 700 seat movie theatre was originally decorated in the Mediterranean Rivival/Atmospheric style, complete with murals and a lighted star constellation in the ceiling. The theatre has both screen and stage capabilities.

In the mid-1950’s, the State Theatre was remodeled to accommodate more modern tastes and the CinemaScope format. The Mediterranean garden wall was removed, the murals painted over and a permanent screen erected. It was operated by the Wilbey-Kincey chain.

In 1978, the State Theatre showed its final feature film and was closed. On January 11, 1985 it reopened as the Christian Cinema, screening religious films. On August 12, 1988 it was renamed All American Family Cinema. Around 1990 to 1992 it became a dinner theatre then a nightclub and a gymnasium. It was last used for 10 years as a cheerleading school. In 2007, the theatre was purchased by DB3 Development Company,

DB3 is currently renovating the building according to Stillwell’s original plans, which they obtained from his archives. Currently (in early-2009) under construction, the State Theatre was planned to reopen in Spring 2009. However restoration appears to have stalled by late-2019. A new owner purchased the theatre and hopes to reopen it as a movie theatre with stage shows in 2021.

Lamplight is working to finnish restoring it!Hopeing thay got all the pleages that thay need.

Lamplight bailed on the State and bought the Strand instead.

A couple involved in downtown Kingsport has purchased the State:

1951/`52 photo added courtesy of the AmeriCar The Beautiful Facebook page. Original marquee on the far right.

The official web site link is defunct. The State Theatre Company also has a Facebook page, but it hasn’t been updated in almost two years. There is also a Twitter feed, but its last update is from 28 June 2017. The theater company was presenting events that year, but apparently not at the theater itself. I haven’t found anything more recent, and suspect that the renovation project is currently moribund.

This reopened as the Christian Cinema on January 11th, 1985 and renamed All-American Family Cinema on August 12th, 1988.

Google Street View of April 2019 shows the exterior and marquee to be in reasonably good condition.

New State Theatre owner plans to revive the downtown Kingsport venue (December 2019, WJHL)– Mark Hunt plans to bring new life to a historic landmark of downtown Kingsport. “It’s been an infatuation I guess, and a dream of mine since I was in my twenties to have a little theater,” Hunt said. Hunt is a Kingsport native and owner of auto repair business The Body Shop. But now he also owns a piece of Model City history. Hunt purchased the State Theatre on Broad Street in November from Kingsport real estate agency Urban Synergy. He plans to restore the venue into an entertainment spot for the whole community. “We’re going to try to get it back just the way it was,” said Hunt. “Just tweak it a little bit, outside of just [showing] movies. Try to get some live music or stand-up comedy. Mix it up a little bit.” The State Theatre opened in 1936 and drew in audiences with movies and plays throughout the decades. Its doors closed in the 1970s and the building fell into disrepair. There have been several owners and temporary businesses in the building since. Hunt says there’s plenty of work to be done to restore the State’s former glory. “The seats are gone, the stage is there. Ninety to ninety five percent of the electrical is finished. So the big part is over.” Hunt’s efforts have the City of Kingsport’s support. “Downtown buildings and especially theatres from back in the day, those are harder venues [to revive] because of your capacity and your seating,” said Jason Hudson, Kingsport’s economic development director. “It takes passion. And having a local business owner who has that passion to bring it downtown is the best chance of success for the theater.“ Hunt said the State Theatre will likely reopen in 2021, but a late 2020 opening is also possible. “We’re going to try to shake Kingsport up a little bit here in the next couple of years,” said Hunt.