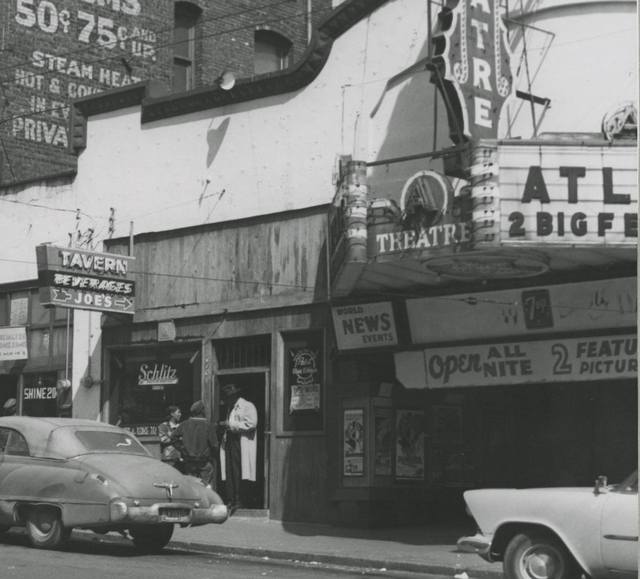 The Kokusai Theatre on Maynard Avenue in the Seattle International District closed in the 1980’s. It had been run by three generations of Japanese Americans, founded by a “benshi” who had started out showing silent films in Buddhist and Japanese Christian church basements, a benshi being a narrator for the silent screen. It was closed during World War II but the family was fortunate to regain their property after the war.

In the 1960’s and 1970’s the Kokusai Theatre was very run down because it did not have enough business anymore to afford repairs. It was showing aged film prints, many of the color films washed out to pink, and the projectors frequently broke down but a patient audience would await repairs, or in some cases wait for reels to be changed on the same projector if one of them needed new parts.

When there were more Issei (first generation Japanese Americans) in Seattle, the Kokusai Theatre was always well attended by people nostalgic to hear their language and see their history played out in samurai films and the like, But as that generation died or became less ambulatory, the newer generation did not speak Japanese and felt much less nostalgia for more than going to the films with grandma. The audience was vanishing.

The young members of the family really only kept the Kokusai Theatre going for the sake of their matriarch’s happiness, and they would close the theatre only after she died. Similar theatres in Toronto, Vancouver, L.A., San Francisco and Hawaii were dying off like flies, until the Kokusai Theatre remained as the last of a dying breed, mainly because the children were not willing to close the place while their matriarch lived and so kept it going far beyond its profitability.

In the late-1980’s and early-1990’s the Kokusai Theatre’s front area was a pleasant little noodlehouse and the theatre in back pretty much abandoned except for storage. In 1997, the roof of the long-neglected Kokuksai Theatre caved in, reminding me that even in the 1970’s little bits of the ceiling had fallen loose and there were a few seats blocked off so no one would be sitting under the weak part of the ceiling. When it finally caved in, the theatre was more than 80 years old and covered the entire history of Japanese cinema in America, and for me personally it is a loss that can bring me to tears if I dare think too long about it.

To me it was a dreamy, dreamy, wonderful cinema because I could see two Japanese movies each week, then the next night at Toyo Cinema down Rainier Avenue I’d see two more, so for over a decade I was watching four Japanese movies per week not counting what could be found in white theaters or campus film programs (not the mention all the Chinese films I could see around town). Thousands of Japanese movies I got to see, and the DVD revolution has not yet reduplicated that possibility even for the small screen; certainly no one will ever have that opportunity to see so many Japanese films on a big screen ever again in America. I was absolutely steeped in samurai ethos and it shaped my young life as a martial artist, then as a novelist, and even affected by diet and the clothes I wore. I would not be the same human being without Kokusai Theatre.