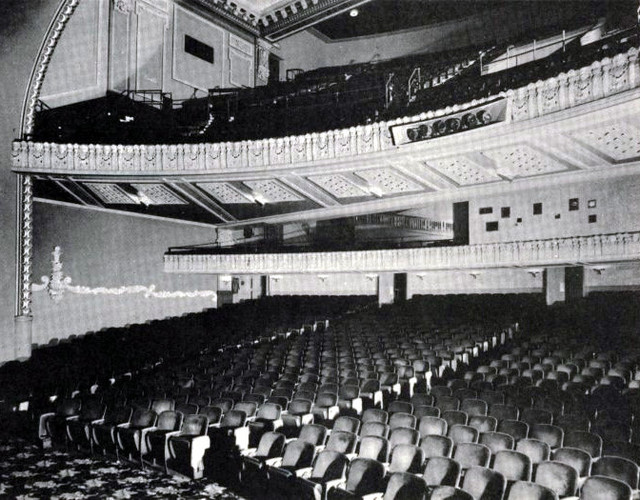 The Coliseum Theater opened in 1916 as Seattle’s first theater built specifically for motion pictures. Priteca would later go on to design the Paramount Theatre in Seattle over a decade later.

Built for the Pantages chain, the Coliseum Theater was monumentally Neo-Classical in style, with its gleaming white terra cotta façade, and its distinctive half-dome like marquee, which was crowned by a small domed temple, all brilliantly illuminated by lights, looking like an ancient imperial monument on Pike Street.

The interior was equally stunning, with ornate plasterwork, including busts of goddess, gargoyles and a huge lion’s head over the proscenium arch. The lobby featured imported Italian marble, lighting fixtures designed by Priteca himself, and a huge chandelier. In keeping with the Roman theme, mosaics decorated the lounges and foyer floors.

The Coliseum Theater operated as a first run house until closing in 1990, when it was forced to shut down due to decreasing business. It sat vacant and falling apart through the first half of the 1990’s, until 1995, when the dilapidated Coliseum Theater was acquired by the Banana Republic clothing store chain, and completely gutted inside, though some of its still-beautiful plasterwork was retained and cleaned and can be seen throughout the store.

The exterior was somewhat altered, its original half-dome shaped marquee having long been removed, and its replacement also being removed, in favor of a modern glass and steel awning over the main entrance. The terra cotta has been cleaned and is now dramatically illuminated at night, picking up its details, such as the medallions and floral patterns.

The Coliseum Theater is today a great example of historic preservation and adaptive reuse. The Banana Republic store closed at the beginning of the Covid=19 pandemic and the closure is permanent. The building stands vacant in August 2022.

Yes the elaborate and grand original Coliseum Theatre was made a lot less elaborate and unique around 1950. Something very dramatic about viewing a film there though. Great curtain design and art deco proscenium. Big wide screen too. The auditorium was not deep but wide and one felt very close to the big screen. Probably still my favorite theatre in Seattle. Hope it is restored someday and used for stage presentations. Seattle needs another stage theatre. It just needs a stage.

The Coliseum was known as United Artists Theatre from August 1927 (until some point).

Some newspaper ads uploaded to photos

Only some of the original remains. The interior has been gutted and the marquee removed. It is now just retail space.

As cited in my retrospective article, “The Game Changer”, the Coliseum held the longest-running engagement in a single-screen theater of “Jaws.” (There were a few longer runs of “Jaws,” but they were held in a multiplex.)

Interesting about Jaws. I saw both Conan films there and quite a few horror/action films too. Terminator was one of them. It ran a long time too. It was a first run house until the end. The last film was Tremors. This theatre should be restored to its original interior and given a stage for live action theatre. The balcony is still intact and the original ceiling and back wall in the upper reaches.

The Coliseum Theatre still has the whole top half left where the balcony was, intact above the false ceiling of the store below. I took a tour a few years ago, they keep this part of the old theatre closed off to the public. It just sits there year after year gathering dust seats and all. Someone needs to open the top part for shows and events, it is a large space. I remember as a kid going into this theatre, It had one of the steepest aisles going down to the screen. A big slant when walking to your seat in the dark.

Banana Republic closed it’s store in the Coliseum during the pandemic and has announced that the closure is permanent. This theater is vacant, ready and waiting for…? The interior is mostly intact, the conversion to retail was done with the idea that it might someday re-open as a theater.