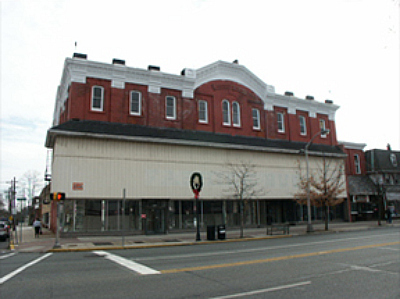 Open since at least 1920 when a Kimball organ was installed, this theatre made the New York Times on 2/17/1932 when the local police record sentenced three schoolboys, charged with having broken the lock of the theatre’s exit door to see a movie, to receive ten lashes each and pay a $5 fine. The officer then descended from the bench and administered the flogging himself with a borrowed strap.

The theatre is still listed in the 1951 Film Daily Yearbook.

The building was converted into housing for the elderly in 2013.

WOODBURY — In the vacant hulk of the G.G. Green Block Building, Tim Kernan and Bob Melvin see the city’s future — as well as their own.
The owners of Melvin/Kernan Development Strategies, an urban planning firm in West Deptford, last month signed an agreement to buy the former opera and movie house at Broad and Centre streets from its private owner for $500,000.
They’re not the first developers who have taken a shot at bringing back to life the 126-year-old building in the heart of Woodbury, which has long been seen as a catalyst for revitalizing the city’s struggling downtown.
But Melvin, 47, and Kernan, 42, say their plan can work because they won’t be absentee landlords.
They’ll move their growing planning firm, as well as Kernan’s civil engineering firm, Kernan Consulting Engineers, into the building’s second and third floors, bringing with them roughly 40 employees. The first floor would house a restaurant, retail space and a performing arts center.
“Our firm tries to promote bringing people back to walk-able communities, and if we’re going to try to convince other clients, it makes sense for us to locate in one of those communities,” Melvin said.
One hurdle the duo must clear is getting approval for a $1.5 million grant from the state Casino Reinvestment Development Authority for renovations.
In November 2004, the authority awarded the grant to the building’s previous developer. But since Melvin and Kernan have a new plan, they had to repeat the application process. They’re scheduled to meet with the authority next month.
Without the grant, they say, they can’t move forward. They estimate it will cost $6 million for renovations.
Parking is another potential obstacle.
The city has a tentative agreement to buy a nearby parking lot owned by Verizon that would provide an additional 32 to 36 spaces for the Green building, Mayor Leslie Clark said. The details should be ironed out by September, she said.
“We’re doing everything we can from the city’s side to make this project happen,” said Clark, who added she’s confident the pair will be successful.
HISTORY
â€¢ The G.G. Green Block Building was built in 1880 by Woodbury’s first industrial magnate, George G. Green.
â€¢ The building originally housed five stores and Green’s Opera House, with seating for 1,000 on the second floor.
â€¢ The opera house later was converted into the Rialto Theater, which closed in 1955. The building’s first floor became a clothing store that remained in business until January 2001.
â€¢ In November 2004, the state Casino Reinvestment Development Authority approved a $1.5 million grant for renovation.
â€¢ In November 2005, Philadelphia-based Teres Holdings LLC announced it would not renew its option to buy the building because it couldn’t find a tenant willing to open a restaurant for the first floor.
â€¢ In June 2006, Bob Melvin and Tim Kernan, owners of Melvin/Kernan Development Strategies in West Deptford, signed a $500,000 agreement to buy the building from its private owner.

Here is the link to the original article & photo, don’t know how long it will be active:
View link

Here is an expanded version of one the 8/7/05 photos, from the Irvin Glazer theater collection:
http://tinyurl.com/omm4m5

One paragraph from today’s Inquirer story: A remnant of an era when Broad Street was the downtown for much of Gloucester County, the Green Block includes a second-floor opera house that later became a 1,100-seat movie theater called the Rialto. The last picture show was in 1955, and Fashion Bug, the most recent store to inhabit the ground floor, closed in 2000.

Theatre will be converted to age-restricted housing.

The renovation into housing has been completed.