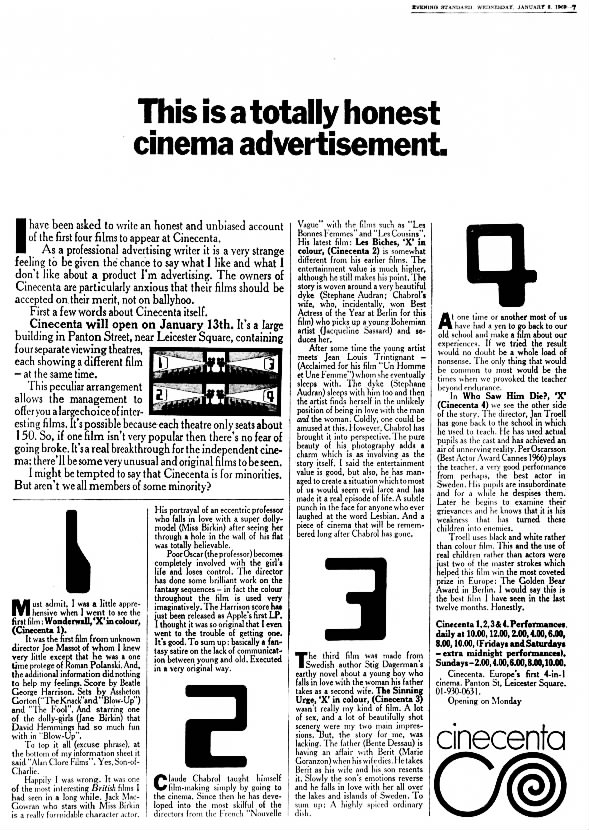 I recently bought a copy of Philip Turner’s book “Cinecenta Cinemas” (see it here . It’s an excellent book. Very rich of informations and illustrations despite its small size (A5 format, 30 pages). Copies are still available on various online shops including Amazon.

I just found these short films showing the animated sign of the cinema from 1969 when called the Cinecenta :

Zappomatic: Well spotted, thanks for the correction!

It appears Swindon Interiors have reused the photos of the Putney refurbishment on that page.

Swindon Interiors were the principal contractor for the “Luxe” refurbishment, and the above linked page has photos of auditoria, foyer and toilets, with Dyson Airblade hand dryers prominently featured!

According to that page, the project also involved asbestos removal.

I was in Screen 2 last week and it was very nice. They have a proper ‘scope screen, and they used their side masking for their flat trailers and ads, opening it for their 'scope feature. The reclining seats are so comfortable that I had trouble staying awake, even though I was enjoying the movie. The screen is kind of small and off-center to the front of the auditorium, but it couldn’t be any larger due to the width of the auditorium. The presentation was excellent.

I never went into the old Odeon but may be tempted now it has been refurbished.

Can anyone tell me about the screens? I guess they must be relatively small given the size of the cinema, but are they a good size relative to the auditorium sizes? Have they changed with the refurbishment? Are they Scope?

An Odeon press release on the new LUXE auditoria at Putney, Haymarket and Swiss Cottage says that:

–“Each reclining screen will be upgraded with new speakers and Dolby 7.1 surround sound throughout to see the latest entertainment in style… –"Haymarket will include… four fully-refurbished screens with upgraded Dolby ATMOS sound systems… [and]… 24 speakers across all auditoriums.”

On Odeon’s website, no reference to ATMOS can be found under “Cinema information.”

I assume they mean 24 screens in each auditoria, otherwise that’s only enough for 5.1 in each, L/C/R/LFE behind screen, and a “rear array” comprising 2 speakers!

OTOH 24 in each would imply a seriously overspecified rear array for such small auditoria. Maybe they’re counting every driver (e.g. every woofer?) Go figure…

Zappomatic: One of the photos to which you refer on Odeon’s site is actually of a Luxe iSense auditorium!

It’s the one with the blue concealed LED lighting on the sidewalls. The overhead speakers for Dolby Atmos can clearly be seen.

Reopens Thursday 14 December with Battle of the Sexes, Blade of the Immortal, Brigsby Bear, Stronger, The Disaster Artist, The Florida Project and The Man Who Invented Christmas.

Adult ticket prices have increased to £10 off-peak (Monday to Thursday) and £15 peak (Friday to Sunday).

The webpage is using photos of another Odeon Luxe so I fear some people might be a little disappointed by these dinky screens!

Here’s the planning application for the new signage.

A recent licensing application is also listed; alas the only information within is:

“A refurbishment is proposed at the premises involving the removal of existing fixed seating in each of the four auditoria involving the introduction of larger, more luxurious, fewer fixed seats resulting in an overall reduced capacity.”

“less seats and more personal space… it’s time to experience films the way they were meant to be seen with ISENSE… Dolby Atmos sound and flawless 4K projection.”

Panton Street, OTOH, could be considered the ultimate wrong venue for spacious luxury cinemas… would seem to be some room for reconfiguration if the projection booths are dispensed with to form boothless auditoria.

Surprised that this is getting the Luxe treatment and not Odeon Covent Garden.

Closing on 23 October for refurbishment into ODEON Luxe Haymarket. Very little change externally – panelling under the ODEON lettering to become blue with LUXE lettering on top.

The link to the article quoted by CF100 “Four-in-one-cinema” doesn’t work anymore because it was modified. I found it with Google : https://vads.ac.uk/diad/article.php?title=243&article=d.243.39

Only went once to this cinema while on holiday in London in the eighties, to see “Throw momma from the train”. I found both the seat and screen to be small, and had to sit in the first few rows for a satisfactory “wide screen” illusion. I’m surprised to see it still stands today. I guess the program and refurbishment have been smartly thought out.

Four-in-one-cinema – Design Journal (1969) article published at the time of its opening as a Cinecenta; it includes a number of photos and a plan. Quite a compromised (asymmetric auditoria) design for a new build.

God, this little place is a really rotten place to see a movie, it’s so bad, there is almost a charm to it. The screens are tiny, even the ones at the swiss centre seemed bigger (despite being smaller) as there was a feeling of space. At Panton Street, the seats are buched togethyer and the ceilings are low. I saw Running on Empty, Men Don’t Leave and Three Colours Red there among others.