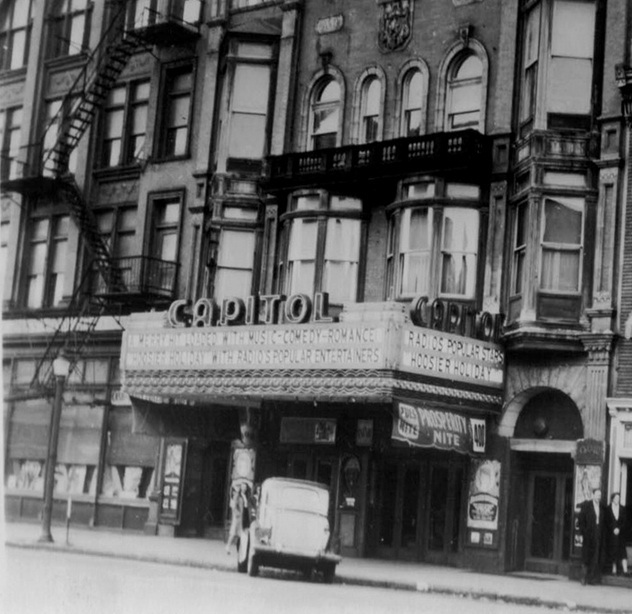 The Capitol Theatre was a large theater located on Independence Street in Shamokin, PA. I don’t have any additional information on this theatre although believe it opened around 1920 and operated into the mid-1960’s.

Attached is an old post card image of Independence Street in Shamokin. The Capitol is on the right.

I am shocked to see this listed, Shamokin is never looked at for anything but it’s coal mine hey days. I don’t know much about this theater but did know that it was a place to go besides the other to theaters in town that are gone. I don’t recall the name of the one theater but the other was the Victoria or Vick as the old timers called it. Wendy’s fast food now sits where the Capital once stood, the other two I’ll explaine later if its on the list.

The Capitol Theater was an old Vaudeville theater which later
showed movies. It operated into the mid 1960s. It was owned by
The Buckley Amusement Enterprises which also owned the Majestic
Theater in Shamokin, The Elk theater in Mahonoy City and the
State Theater In Mt. Carmel, Pa.

The Capitol was one of three operating theaters in Shamokin.
The other two were the Victoria and the Majestic. The Victoria was
build in 1917 and was on the National Historic Trust Landmark
list. Several years ago the National Trust Published a book on
Movie Theaters. The Victoria was still standing at the time and
the book featured the Victoria as one of the 50 best American
Theaters still in existance. The Victoria was built as the flagship
of the Chamberlain Amusement Corporation which also operated theaters
in Mt. Carmel and Mahanoy City under the name Victoria. It was designed by a Shanokin Archtitect who went on to design many theaters
in the Philadelphia area. The Shamokin Victoria was his first. I
believe there is still a theater standing in Easton Pa that he designed.

The Capitol Theater had booking arrangements with Paramount, Universal, Columbia and Warner Brothers. The Victoria had arrangements with 20th Century, MGM, United Artists and also
shared Paramount features with the Capitol. Until the early
50s the Majestic shared MGM product with the Victoria but in
later years the Majestic showed Republic, Allied Artists, Monarch
and other B studio product.

The Capitol had a magnificent chandalier with multi colored lights.
I have been told the chandalier was destroyed in the demolition of
the theater. I have the brass poles which held the velvet ropes
that were used to control crowds in the lobby. The Capitol was a
good size theater for a small town but it was small in comparison to
the nearby Victoria. The Capitol had seating on two levels the main
floor and balcony with about four boxes. It has a beautiful gold
asbestos curtain.The 2nd floor of the building housed the office
of Dr. Marcus a local dentist and the main offices of Buckley Amusments which operated the theater.

On Saturday mornings the Capitol held “Cartoon Carnivals” They would
show several cartoons and a serial (no feature). They also showed
what I always called race films. These were live action two reelers
that featured very funny characters racing. All the characters had
number and when children entered the theater they were given tickets
with the umber 1-10 on them. The children would root for the character in the film who had their number and if their character won
they would win a small prize. I don’t know who produced these films
and I have never been able to find any reference to them in movie
books. Indeed I have never met anyone other than my cousin who
remembers them.

I have quite a few memories of the Shamokin Theaters I would be glad
to share with anyone who is interested.

Here is an undated photo from the Philadelphia Architects & Buildings website, specifically from the Irvin Glazer collection:
http://tinyurl.com/yvc4hz

I own a Raynor Lehr Musical Comedy Company letter that was sent to my grandfather on 10/1/27 offering him and his dance partner a job performing at the Capital Theater in Shamokin Pa. signed by Billy Kane…They were as Cupoli and Strait at that time but change name to Nice and Strait latter in their vaudeville act…

In her autobiography the actress June Havoc writes about appearing at the Capitol in her vaudeville act as Baby June. This act has been immortalized in the Broadway Musical “Gypsy”. A local Shamokin boy joined the act and left town with the troupe headed by Mama Rose. G. Hoy

My late mother, Rita Dusick, grew up in Shamokin on South 1st Street in the 1930‘s, 40‘s and 50‘s and moved away probably by 1960. She graduated from Coal Township High School in 1952. (Does anyone remember her and/or her family?: father John J. (who was a Justice of the Peace and died in 1963), mother Victoria Wysocki, sister Marian.)

I visited Shamokin for the first time in September of 2013 during what I called my “PA Trip ‘13“. … I found it moving to walk upon streets my mother inhabited before I was ever a concept.

(Hmmmm…. There’s an ad in the photos section for Mother’s Day at the Capitol from when my mother was a kid. :) )

At the Shamokin-Coal Township Heritage Museum in the American Legion Building on Independence Street next to the Public Library (210 East Independence Street), I bought a locally produced book called “Matinee Memories” about the movie theaters of Shamokin, including some that existed before the Victoria, Capitol and Majestic.

I have uploaded a photo of the cover and the inside cover in the photos section.

The author, Garth Hall, passed away in January 2016, and I got the impression the book was only available from him/the museum.

The inside cover says the project was prepared for The Northumberland County Council For The Arts & Humanities. Perhaps they have copies for sale or perusal and can be contacted by clicking here.

Maybe the Shamokin-Coal Township Public Library next to the museum has a copy or can tell you where to find one.

And there is the Northumberland County Historical Society to try if other options don’t pan out.

You could include the photo of the book when emailing these places so they know what you are asking about.

Hi my name is Jennifer Weaver, my mother Frances Mertz went to school with your mother, Rita Dusick. Apparently my maternal uncle dated your mother and recently learned of her passing. He asked me to try and locate you. I have lived in South Florida for 20 years. If you would be willing to speak with him call me Malek Theater-256-4110.

To Garyhoy. I know this is late but I just found your note. I remember what you call Race films. We here in Boston called the the same. Our local theatre the Dorchester(better known as the Dot showed them every Sat in the late 40’s to the 50’s. Same thing, a ticket # and if your # came in you won a prize. Usually a box game or a toy donated by a local store. They would show several cartoons, a short, usually 3 stooges and a western all for 10cents. Lots of fin. Our other local theatre up the street the FIELDS cORNER USUALLY HAD A LIVE SHOW WITH A GUEST. I REMEMBER SEEING howdy dOODY WITH bUFFALO bOB’S BROTHER bUFFALO vIC WITH Clarabelle AND cHIEL tHUNDERTHUD AT ONE SHOW. I ALSO SAW cowboy star Sunset Carson. also fun. They would then show whatever movie was playing at the time. When that came on all the kids would get up and leave unless it was maybe a Lassie Movie or something like that.

Jennifer Weaver, thanks for writing. You may email me at ds2020 at netzero.com