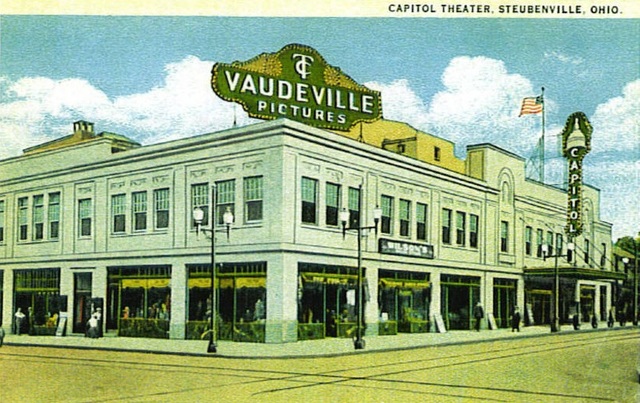 It could have been set up to feature Steubenville’s native son, Dean Martin and his films with posters in the lobby, etc.

The first film to play there in 1925 on opening night was “The Wife Which Wasn’t Wanted” starring Irene Rich.

This link contains a good photograph of the 1927, Robert-Morton 3- manual theatre pipe organ that was originally installed inside Steubenville’s Capitol Theatre. This fine instrument is now showcased in Tulsa, owned by Sooner State ATOS Chapter,
http://members.aol.com/SoonerStateATOS/

Here is some additional information:
http://tinyurl.com/qtcszc

Here is an April 1936 ad from the Steubenville Herald Star:
http://tinyurl.com/ylbemn2

Patsy, nice idea about reopening the theatre and making the lobby into a Martin tribute but unfortunely people in that city would never go for something like that.It seems like people in the entire northern Ohio valley which Steubenville is situated in have a natural aversion to anything that would help their city out.They are a cultureless people, or at least the majority of people I met while living in that shit hole.

Steubenville’s Capitol Theatre opened on Labor Day, 1925, according to an item in the September 9 issue of The Film Daily.

The Theater Designs of C. Howard Crane, a thesis by Lisa Maria DiChiera (Internet Archive scan) has a list of Crane’s theater projects, and the Capitol Theatre at Steubenville is listed as project #527. The list does not give the dates of projects, but the Capitol is shortly after the Bonstelle Playhouse in Detroit (#518) and before project #549, a theater for Max Allen (the Park Theatre) at Lincoln Park, Michigan, and both of those theaters were built in 1925, so Crane was the original architect of the Steubenville Capitol built that same year.

Signed architectural plans of C.C. and E.A. Weber of Canton, Ohio in photos.