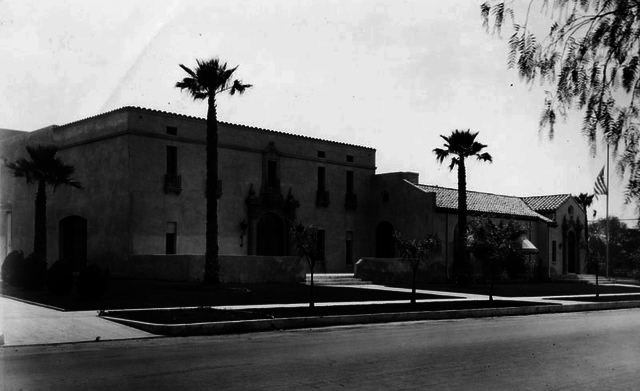 The Villa Glen Theatre was originally a 900-seat theatre with hard wooden seats, and dated from the silent era in 1922. Because of the similar name, this Central Avenue theatre has sometimes been confused with the Glen Theatre (originally Bard’s Glendale Theatre) on Colorado Street, on the other side of downtown Glendale. The Villa Glen Theatre closed in 1978 and was subsequently demolished.

The 1975 cornerstone removal date seems wrong for a Villa Glen demolition date, especially if the building operated as a mortuary (?) for a year or so after the theater closed, before it was finally demolished. Hmm.

I see that the “official” web site is defunct. That site (Bijou Manager) had several pages about several other theaters in Glendale and the San Fernando Valley as well as the page about the Villa Glen.

The information that the building started out as a clubhouse built n 1923 is interesting. That would account for the wooden seats it had, which were mentioned at the now-vanished web site. That site was also the source of the 1978 closing date. It might have been wrong.

Knowing the building’s origin as the Tuesday Afternoon Club has allowed me to track down the name of the architect in the California Index. The building was designed by Alfred F. Priest, who was also the architect of the 1920 Glendale Theatre.

Thanks to Dan M and -DB for helping to fill the gaps in the Villa Glen’s history.

The Glendale Symphony Orchestra performed there in 1924. There’s a program book listed amongst the Glendale Library’s Special Collection items.

She said the building, which opened in 1918, is one of the few remaining examples of the architecture of Alfred Priest, who also designed the original Tuesday Afternoon Club. That building was included on a list of historical sites but was demolished in 1977, before the city adopted its preservation ordinance.

And read the rest of that to see just how worthless Glendale preservation ordinances are. Elks: “Oh, we allowed our official historical landmark building to get so run down that we can’t afford to repair the results of our criminal neglect, so please declare it to be no longer a landmark so we can tear it down and leave it as an empty lot while we build a new lodge elsewhere.” Glendale: “Sure!!”

Chunigucresque?? :-D Actually, it’s spelt correctly in the scanned document, but the transcription leaves something to be desired. OCR fail.

So was it built with a balcony or not? My sig. other doesn’t remember one, but that was 25 years ago.

There might be more info at the Glendale Public Library, since apparently the Tuesday Afternoon Club founded the library.

I found a couple of photos of the building in the Los Angeles Public Library collection:

I lived in Glendale for quite some time and did a lot of walking down to the Galleria via Central. I could swear the Tuesday Afternoon Club was at Myrtle and Central before it closed, where the “Professional Development Center” is today. I found this online, but the picture does look more like the Lexington corner:

I remember when TAC closed its doors. But then I was more confused when I saw the plaque later across the street!

I was manager in late 1970 early 1971 for the lessor by the name of Jay. I remember the cinemas connection to the club. We had a low cost last run policy and Jay had a knack of picking popular films such as Steve McQueens “Bullit” which we played to sold out shows. The projection booth was encased in fire resistant metal which also made it a shock hazard operating the projectors. The death of the boy from the booth fire gave the cinema a haunted aspect that was felt by people in the booth and in the front of the auditorium where the victim was supposably found.

I hung out there as a kid. Grew up in Burbank. We always thought it was an old Mortuary…

I have re-established “Bijou Memories” and have updated all of the original articles with new photos and much more info. You can read about the Villa-Glen and it’s convoluted history at; https://bijoumemories.blogspot.com/2017/07/the-villa-glen.html Enjoy.