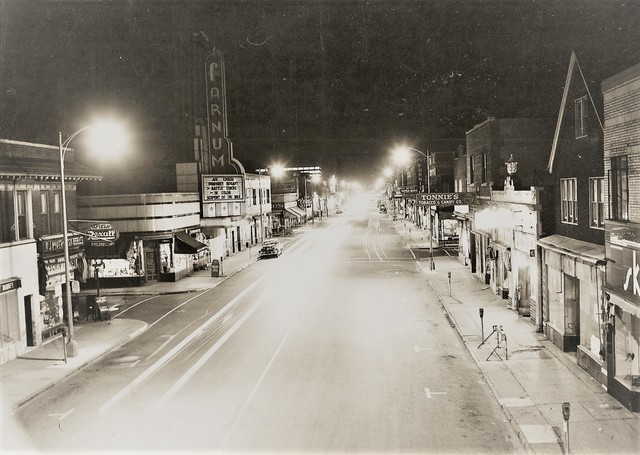 There is a vintage photo on this page:
http://tinyurl.com/6h7mmo

Arcadia Publishing Company’s book “Hamtramck” by Greg Kowalski (at Google Books) has a nocturnal photo of the Farnum Theatre, the caption of which says that it opened in 1918 with 900 seats, and was closed in 1967 and has since been demolished.

It also says there were once seven movie theaters in Hamtramck, which means two are still missing from Cinema Treasures. I’ve been trying to track down a theater that was planned for Hamtramck in 1918. If it was built, it must be one of the missing two. An item in Michigan Film Review of February 26 that year said that it was to be located “…near Florian Street….” Assuming that it would have fronted on Joseph Campau Street, it probably wouldn’t be any of the five houses listed so far on CT. The nearest of those, the Star, was two blocks from Florian.

The December 11, 1917, issue of Michigan Film Review said that the new Farnum Theatre in Hamtramck had opened the previous Saturday (which would have been the 8th.) The house was operated by the Schram Amusement Company, headed by Ed Schram. Mr. Schram also operated a Detroit movie house called the Bernhardt.

An item in an earlier issue of the same publication said that the Farnum Theatre had purchased a Gardiner Velvet Gold Fibre Screen.