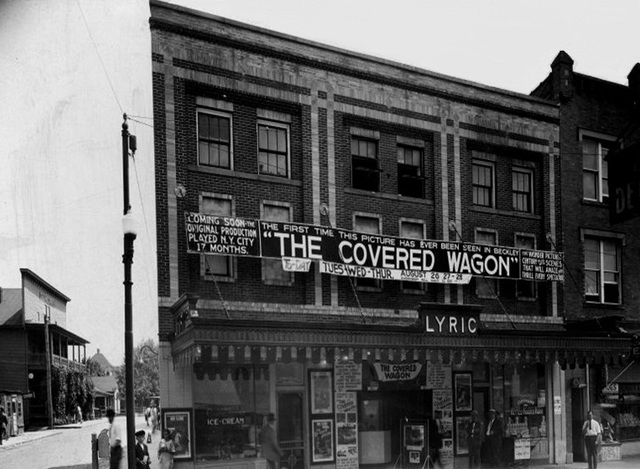 An inventory of historic buildings in Beckley prepared for the NRHP in 1994 indicates that the Lyric Theatre was on what was by then a vacant lot at 300 Neville Street.

The document actually says 310 Neville, but this is a typo, as another building, still standing today, is also listed as 310 Neville. The document also gives the name Lyric/Palace Theatre, but other sources show that the Palace was on Kanawha Street, and opened before the Lyric. Unless the Lyric was renamed very late in its history, it wasn’t ever called the Palace.

A timeline of Beckley history on this web page says that the Lyric Theatre on Neville Street opened in 1920 and showed its last movie in 1967, but the Arcadia Publishing Company book Beckley, by Fran Klaus, says that the theater closed in 1959.

Is this theater still around? I am in the process of buying and rehabbing the Philippi Grand and if it proves profitable I want to work on reopening other theaters in WV, KY, OH, PA, MD, and VA. There are so many wonderful old theaters with more character than any modern cookie cutter places.

The Lyric Theatre has been demolished. It was on the southwest corner of Neville and Heber Streets, as seen in this photo. The site is now a parking lot.

Here is an item from the April 17, 1920, issue of The American Contractor which must be about the Lyric Theatre, despite the mistaken street names:

Christian C. and Edward A. Weber designed four other theaters already listed at Cinema Treasures, only one of which is still standing, and that converted to office space.

The timeline I linked to earlier mentions the first Lyric Theatre that opened on Main Street in 1913. It also mentions the H & M Shoe store at Heber and Neville Streets collapsing in a snowstorm on March 13, 1993. That must have been this theater’s building. The T-shaped intersection has only one other corner, and the building on it is quite old and still standing.