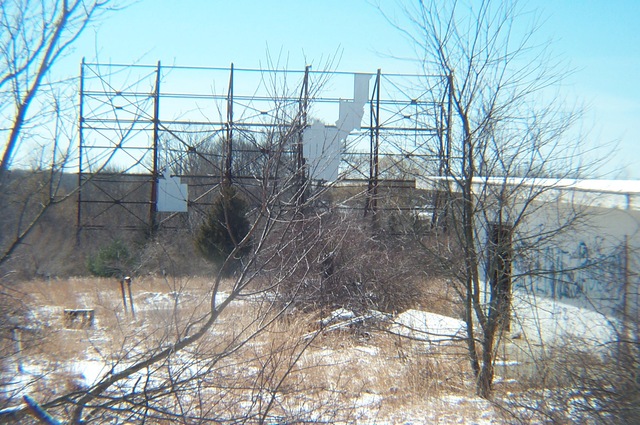 Closed in 1980 according to tax form relics. Possible in-car electric heaters. The concession stand which was boarded up was filled with graffiti and the skeleton screen remained until eventual demolition. A MacDonalds restaurant in now on the site.

Grew up in Waterford, and went on my first drive-in date at the Waterford Drive-In. Saw many films with the family there, too! When it was abandoned and started to fall apart, I took a camera there and got some pictures of the sign, the screen and the grounds. I was planning on blowing one pic up and titling it “The Decline of Western Civilization”! I hate to see the great drive-ins go.

We went here a lot in the ‘70s – it was around 20 minutes away from the 2-screen Norwich/New London DI. The Waterford had weird double features, like the Muppet Movie with the Valachi Papers (?!). Saw Pink Floyd at Pompeii there shortly before it closed in 1980 or so! It’s one of the few drive-ins where I ever saw shrimp cocktail and fried clams in the snack bar. There was a Bee-Bee’s Dairy in the shopping plaza next door (later Newport Creamery) where a lot of us got our munchies before driving onto the DI grounds. Here’s a wire report from today:

Waterford (AP)_ Waterford police are looking for a white sport utility that struck and killed a man Friday in a hit-and-run.
Police have identified the victim as a 43-year-old homeless man. Police say Frederick Finn had a New London address but they think he was living in the woods behind the old Waterford Drive-in Theater at the time of his death. Police are still seeking the public’s help in finding the vehicle that hit Finn on the Boston Post Road. The accident happened at about 5:30 p.m. on Friday evening.

The Waterford DI was closed for awhile in 1973, until it reopened under new ownership In August 1973. When it finally closed in 1980, owner Carl D. Sherman also ran the nearby Waterford Cinema, a single-screen on the eastern side of a strip mall overlooking the Drive-In. That theater would soon close as well.

Approx. address for this drive-in was 117 Boston Post Road.

The Waterford DI at Boston Post Road near the intersection of Clark Lane opened in April 1955. In 1970, Raymond C. Sroczenski took over the theater and applied for permits to move the lot down the hill, a bit further from Clark Lane, to a space approximately the same size, but with one direct access entrance from the main road (Boston Post Road, aka Route 1). The new downhill locale also removed the screen from the “light pollution” caused by its original location being in the middle of a rapidly growing array of shopping plazas on all the surrounding properties.

The Google Maps image shows the ruins of the latterday locale, mostly covered in shrubbery. The original drive-in was to the left of that, on the lot now covered by broken concrete and where the small greytop building is attached to the building with the whit roof. Those buildings (the larger being a Stop ‘N’ Shop) went up in 1972 after the original Waterford DI closed, with the small grey roof building housing the indoor Waterford Theater, run by the same United General Theater chain that built the exactly identical Cameo Theater in nearby Niantic at the same time. Carl Sherman ran both the indoor and outdoor Waterford theaters

The new locale was built in spring 1973, though construction and permit delays kept the drive-in from reopening until August 29, with a screening of Dillinger (“Free admission to the first 25 Ladies in Red!”) backed with The Little Cigars Mob. It closed after the summer 1980 season.

BTW, the reason that big empty lot of concrete up the hill from the latterday DI remained undeveloped after 1972 was because the drive-in owners maintained ownership of their property where the original DI had been, refusing to so much as stripe the concrete for parking, in order to ensure that no business or cars would throw distracting light downhill onto their lovely new screen, now finally surrounded by trees instead of billboards and lit-up storefronts.

By the late ‘70s, that uphill wasteland was a mass of broken concrete, possibly broken up by the drive-in owners who wanted to discourage “bootleg” screenings by parked cars getting a free view the new screen, at least according to Waterford city officials who tried to get property owners to fix up overgrown lot (it’s true, you could usually hear the movie fine from uphill, especially if someone on the lot itself turned up a bunch of speakers!).

The fact that both the latterday DI lot and the old concrete wasteland remain undeveloped to this day leads me to suspect they’re still both own by someone apparently unwilling to sell or develop for some reason.

The original drive in was at the intersection of Boston Post Road and Clark Lane. The foot print was actually the entire shopping center now there. Later, a new screen was erected to the left of the old foot print. My brother, Larry and I were involved in the booth installation. Nothing was new. All used equipment Brenkert projectors and Ashcraft lamps. The sound amplifier tower (RCA) Theater Sound I located just inside the door from the rectifier room to help cool it. The screen was nowhere as big as the original Drive In. The parking lot lights from the shopping center lit up the field causing the old lamp houses to compete. Unfortunately, even with home made sheet metal shades installed around the parking lot lights, it never really worked. In your arial photo the second Drive In can be seen to the right of the shopping center. It is rusting away and being reclaimed by the trees. It was a nice experiment, but a failure. Side note: The original Drive In was very successful packed almost every weekend and well built much like the original Norwich New London. What was unusual, was that the projection booth was on the left of the snack bar unlike any other Drive In in the area. Tom Beebe

As of 2017, the property has been developed.