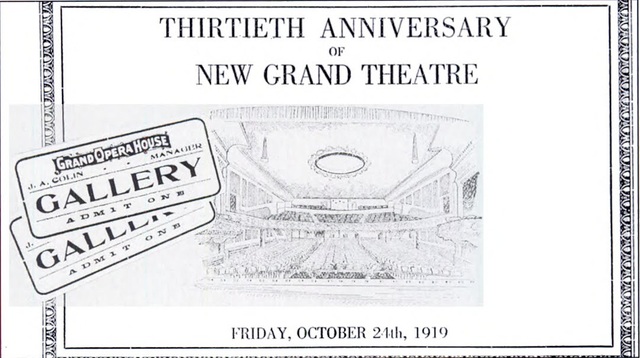 This was the largest theatre between Syracuse and Albany, New York at the turn of the century. Designed by architect Leon H. Lempart Sr., it had a large proscenium arch of 40 feet and a tremendous 40 by 64 foot stage. It was able to maintain over twenty sets of scenery. It opened as the Johnstown Opera House in October 1889. Mainly used for shows, it did occasionally show movies.

It was taken over on a twenty years lease by William Smalley in the early-1900’s and renamed New Grand Theatre. It was destroyed by fire in 1928.

The frontage survived and a new auditorium was built and it reopened as Smalley’s Johnstown Theatre (later renamed Towne Theatre) which has its own page on Cinema Treasures. Today, the front of the building survives, but the auditorium has been demolished.

As the New Grand showed “Cardigan” on 9/8/1922 as part of the 150th anniversary celebration for Tryon County.

It seems a shame that Johnstown, which calls itself “Historic Johnstown,” allowed such a treasure to be destroyed.

New Grand (formely Johnstown Opera House)theatre was on North Market street, but was not at 20 North Market street- that was the address 0f Smalley’s(Johnstown) theatre. (An older theatre, called the Grand was on the same location as Smalley’s until it was destroyed in a fire in 1828) Perhaps some member can find out the correct full address of the New Grand theatre.

A History of Fulton County published in 1892 says that the Johnstown Opera House was designed by architect Leon H. Lempert.

“The Grand, Johnstown, N. Y., is to be remodeled into a modern theatre, with the seating capacity increased 400, while all new dressing rooms will be built.”

I suspect that the house was renamed the New Grand following this 1916 remodeling. The addition of “New” to a theater’s name was fairly common after a major remodeling.

The Grand Opera House in Johnstown is on a list of theaters designed by the Rochester firm Leon H. Lempert & Son that was published in the 1906-1907 edition of the Cahn guide. A History of Fulton County published in 1892 also attributes the design to Leon H. Lempert.

The theater already advertised itself as the Grand Opera House in the July 28, 1890, issue of The Daily Republican, the year after it opened. It’s likely that it was never called the Johnstown Opera House. This is the text of an advertisement that appeared in multiple issue of The New York Dramatic Mirror in the summer of 1889:

“The new and elegant ground-floor Opera House now being built at Johnstown, N. Y., will be one of the handsomest and most complete theatres in the State, will be ready for business about Oct. 10th, and will play first class attractions only. Johnstown now numbers about 10,000 inhabitants and is certainly one of the best show towns in the State, situated 40 miles west of Albany and Troy. The designing and building of our new house has been placed in the hands of Leon N. Lempert, of Rochester, N. Y., which is sufficient guarantee of its being first-class in every respect. The house will be furnished with all modern improvements. Electric Lighting, Gas, Electric Spark, Electric Call Bells, Speaking Tubes, 12 Large Dressing Rooms, 17 sets of Scenery, large number of Set Pieces; Stage 41 by 64 feet, full set of traps; 41 feet from Stage to Fly Gallery; 42 feet between Fly Galleries; 4 elegant Boxes, Orchestra Circle, Dress Circle, Balcony and Gallery, elegant Opera Chairs. Seating capacity 1,200. Ventilation good. Heated by steam. We can play any attraction on the road to first-class business. No passes to stockholders or city officers. Wanted—A Good Attraction for the opening for two or three nights on a certainty. Address C. H. BALL, Secy.”

The frontage of the theater on market st still survives to this day, the theater building in the back has been torn down. I will post some pictures as soon as I can.