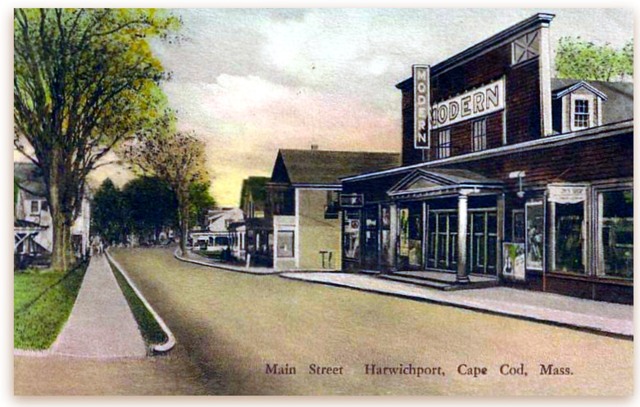 I stand corrected. That makes it open from 1926 on.
There was no marquee; only a glassed in poster display on either side of its “porch-like” entrance. I know for a fact that some rich, summer kids (“yachties”) started stealing the more diserable posters in the mid-to-late 1970’s (“Rocky” comes to mind) to take back to their college dorm rooms at summer’s end. After replacing the poster display glass several times, the manager (old Howard Ellis) had to resort to stapling a plain placard with the movie and its MPAA rating written in magic marker in lieu of the actual poster(s).

a slot on the Port Cinema’s candy machine was labeled “Pot Pourri!”. It was the last slot on the right and I assume it was for all of the oddball candy bars that were left over from filling the regular slots. Feeling bold one Saturday afternoon, I gambled a dime, pulled the plunger, and a Sky-Bar fell out with a piece of paper rubberbanded to it. Upon closer inspection, it was revealed to be a free movie pass that had expired three years prior.
I brought it home and my father made sure that they honored it, expiration date not-withstanding. I’m sure he pointed out that it was the least they could do after allowing children to buy (and eat) two-year-old-plus candybars!

My late father (who summered in Harwichport from 1921 until buying our year-round home there in 1964) was a regular patron at The Modern in the 1920’s and 1930’s. I remember him telling me that it was “quite ornate” in its heyday and had “moving clouds projected against a painted night sky” as its ceiling. Nice. Sounds like a Maxfield Parrish painting.

I remember standing in front of “Minnie’s” (or, as it was named long before: “Wattie B’s”: a taxi stand/general merchandise store/newsstand named after the owner, Watson B. Eldridge) across the street from the Modern with my pal, Jodi Irish. I was, like, four or five, so it must have been 1966 or thereabouts. We watched as they hoisted up and constructed the new, huge, dark green and corrugated “Port Cinema” facade.

It was rumored that old Howard the Manager helped himself to any “paper money” that came back to his office via the Jimmy Fund bucket. This has been since comfirmed by two ex-Port Cinema ushers.

In Spring ‘77, I met up with several classmates behind the 'Port with the intention of all of us sitting together and seeing “Star Wars” for the first time. We had been partying beforehand and nature called so I excused myself and darted behind a dumpster. While indisposed, my “friends” all ran around to the front entrance; forcing me to sit alone in the sold-out theatre. It was uncomfortably warm and I was pretty wasted. Halfway through the movie, I became convinced that the lady in the seat behind me was stabbing me in the neck with a pin.

someone posted earlier that “this theater would be packed with vacationers. It seemed to me that the film would change every few days.” This is quite true. There was not a lot to do in Harwichport other than go see a movie (or send the kids off to see one, while the adults guzzled their Tom Collins on the patio) once the sun went down on the beaches and everyone had finished their last dinnertime fried clam at Thompsom’s Clam Bar (pronounced: “Clam Baaaaah”)
I think the movie changed as often as weekly or bi-weekly.
The theatre was always packed and a line would form early and stretch to the front of the Pilgrim Congregational Church nextdoor. As teenagers, we would occassionally scream the ending of a film at the people waiting in line as we drove by on Rt 28, just to be jerks.

That crack about old Howard helping himself to any “paper money” is a lie! He loved to collect money for the Jimmy Fund and he would never steal a dime of it!

From Harwichport a vintage postcard view of the Modern Theater before it became the Port Cinema.

As the Modern, this theater is listed in the 1927 Film Daily Yearbook as having 592 seats and open 3 days per week.