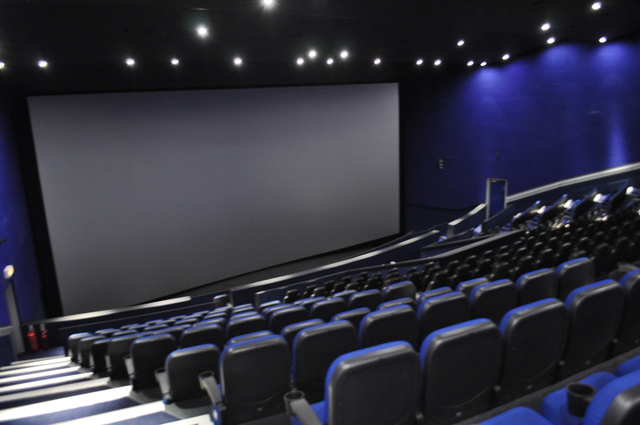 Located in the north London district of South Hampstead on the busy Finchley Road opposite Swiss Cottage Underground (tube) Station (Jubilee Line). The Odeon Swiss Cottage was one of the original cinemas in the Oscar Deutsch chain of Odeon Theatres Ltd. It opened on 4th September 1937 with Leslie Banks starring in “Farewell Again”. It was one of only nine of the original Odeon Theatres to be equipped with a theatre organ, in this instance it was a Compton 3Manual/8Ranks (with Melotone & Grand Piano)and illuminated console which was opened by organist Alfred Richards.

The exterior of the building was rather plain and was basically a brick box. The facade relieved of its drabness by a series of seven tall recessed windows which let light into the circle foyer. Inside the auditorium, there were a series of stepped deep troughs on both the ceiling and side walls that contained indirect lighting. The original seating capacity was 2,115; with 1,281 in the stalls and 834 in the circle.

This interior was ‘modernised’ in 1960 and from 25th February 1973 the Odeon became a triple screen operation which were located in the former circle and two smaller screens in the rear stalls area. From 19th June 1992 three further screens were added which were located in the former front stalls, on the stage and in the fomer circle foyer. There is now little remaining of the original decorative features within the building, but the exterior remains basically as built.

It continued as a 6 screen Odeon with seating capacities in the screens given in 2008 as; 715, 111, 217, 120, 154 and 156, giving a total seating capacity for 1,473. Catering to the local community, despite newer purpose built multiplex cinemas operating in the neighborhood.

It was closed in April 2011, for a complete modernisation which included installation of an IMAX auditorium, new seats and screens, and re-opened on 16th September 2011. Now with 5 screens, the 307-seat IMAX screen is located in the former circle, the side-walls of which have been brought in by around 12 feet on each side. There is an original decorative plaster band and one of the lighting troughs in the ceiling, but are difficult to see as the entire space is painted a dark blue. A new projection box has been built at the rear of the former circle, with the original projection box behind the rear circle back wall now abandoned. The other screens seat;171, 76, 61 & 61. All are fully digital, although the 171 seat screen has retained a 35mm projector. In December 2017 screens 2 - 5 were upgraded and re-seated to become an Odeon Luxe cinemas with reduced seating capacities of 71, 50, 53 & 49 and the IMAX screen now has 184 recliner seats.

LARGE_screen_format: You’re right that I am, but I’ve come down with a bit of cold I’m afraid. :–(

The OSC IMAX did indeed originally have non-recliners installed at the time of the IMAX retrofit, as shown in the above-linked YouTube video at about 17 seconds in.

Get well soon buddy, we have plenty to discuss…

Some recent photos of the Odeon Imax Swiss Cottage here:–

Thanks for sharing those photos @Ian, the interior of the IMAX auditorium looks great.

Have you watched any movies in IMAX at this cinema, and if so, care to share your experience please? The screen size is slightly smaller than that at Cineworld, Hemel Hempstead where I watch most IMAX movies but then Odeon do have reclining seats which look comfy.

The rear IMAX speakers look the same as those found at Cineworld, Hemel Hempstead. Does anyone happen to know which model of speaker they are?

Looking at Ian’s “IMAX Logo in Auditorium” photo, the vertical geometry of the auditorium appears to be compromised in terms of seating height in relation to the screen. In particular, according to the 1983 article published in the SMPTE Journal which details the geometric requirements for a “classic” IMAX, the last row should be in line with about the mid-point of the screen height.

Simply put, the screen is too low.

Has that IMAX Theatre Design article not been updated since 1983? Things have moved on since then!

Interesting. I saw Mamma Mia part 2 there – perhaps not the best choice of movie for the Imax experience – but was aware (sat centrally in the back on the last full row) that the bottom corners of the screen could not be seen unless the seat was completely upright. And this was in a near empty auditorium (there were 12 of us watching the film), with no-one sat in front of me.

Unlike L_S_F I am not a connoisseur of big screens – this was the first Imax I have experienced for years – so have little to compare it with. All I can report is that the image was very sharp, and the sound excellent (apart from Brosnan’s singing, but that is another story).

My Hemel cinema memories were at the Odeon on Marlowes which had a massive curved screen – but that was decades ago!

Has that IMAX Theatre Design article not been updated since 1983? Things have moved on since then!

Things have moved on a lot since then—e.g. digital acquisition, editing, CGI, and distribution/projection. :–)

The human visual system hasn’t changed since 1983, we still have the same eyes and brain decoding the information received from them. ;–)

It’s possible that post-1983 developments in the understanding of the human visual system could inform auditorium design in ways not anticipated in 1983, but I’m fairly stumped as to see how it could in terms of the design of auditoria with a slightly curved screen on one “wall,” where it is of “wall to wall, floor to ceiling” size, with tiered seating all of which faces towards that screen, in ways that would improve upon the specifications laid out in that SMPTE paper.

Note from the 1983 SMPTE paper: “The bottom edge of the screen is placed so that the audience can look down and up to the sides. This allows the horizon to be in a natural position for most viewers.”

It might be said that the purpose made IMAX content, e.g. the classic IMAX 70mm documentaries, would be framed with the auditorium design in mind, but even so, I can’t see that looking down at the screen would be an optimal position?

In a nutshell the classic IMAX “Grand Theatres,” the expensively purpose-built auditoria of which are mostly found in institutional venues, are the “gold standard” for IMAX auditorium geometry… the existence of which goes back more than a decade before the 1983 SMPTE paper. ;–)

this was the first Imax I have experienced for years

Haven’t you attend any performances at the Leicester Square IMAX? I see there’s a good photo of it among the photos you’ve uploaded to Flickr.