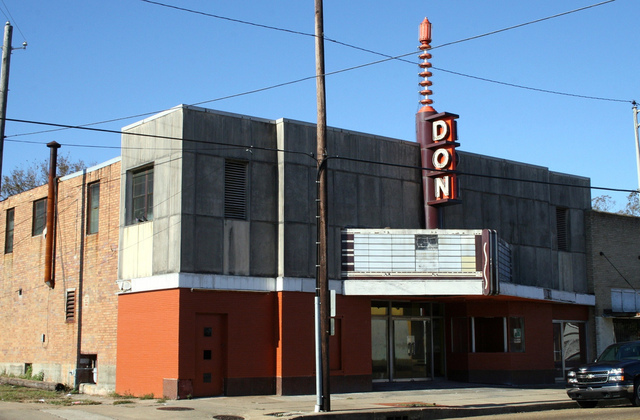 The Don Theater in Alexandria, LA is another theater I came across on the web. It opened June 22, 1941 with Deanna Durbin in “It’s a Date”. The following is a persons recollection of this theater:

“There were the Saturday afternoon matinees at the Paramount, Joy or Don Theaters (single screens with one feature that might play for weeks). When we came out of the air-conditioned Don Theatre we couldn’t wait to cross a busy Bolton Avenue to get a snow cone on a hot summer day before having the theater ticket sales lady call our mothers to come pick us up”.

A 1982 photo of the Don Theater in Alexandria during good times showing “The Seduction” starring Morgan Fairchild and Vince Edwards.

As someone who was stationed at Fort Polk in 1966, I’m trying to track down the names of the three indoor Downtown Leesville moviehouses and the name of the drive-in that was fairly close to town and Fort Polk.

Can anyone help here? There are no theater listings on Cinema Treasures for Leesville theaters.

Thanks very much for any help.

Hello Ed blank. Two of the downtown Leesville theaters were the Polk and the Vernon. No info on the third one or the drive in.
Down the road in Deridder were the Uptown and Realart theaters.

I don’t recall seeing anything in Deridder, but I thank you, Don and Billy for the information. From another source I learnhed that the third indoor was the Lee and that the drive-in was the Pines.

I seem to recall two of the indoors being on the same side of the street and one of the nicer ones being nearby on the opposite side of a side street.

I remember the Pines repeatedly playing a re-release of the eight-year-old “Thunder Road” as a co-feature or third feature and that the drive-in seemed to infested with mosquitos. The heat and humidity were so high you couldn’t keep the windows closed, and yet when the windows were open, you’d turn into a pin cushion.

Had no problems at any of the indoors.

i have a bunch of records a few signed by don. i would like to donate them to the theater if they could be used. he is my second cousin and my grandmother gave them to me. if anyone knows who i can talk to please let me know. thanks