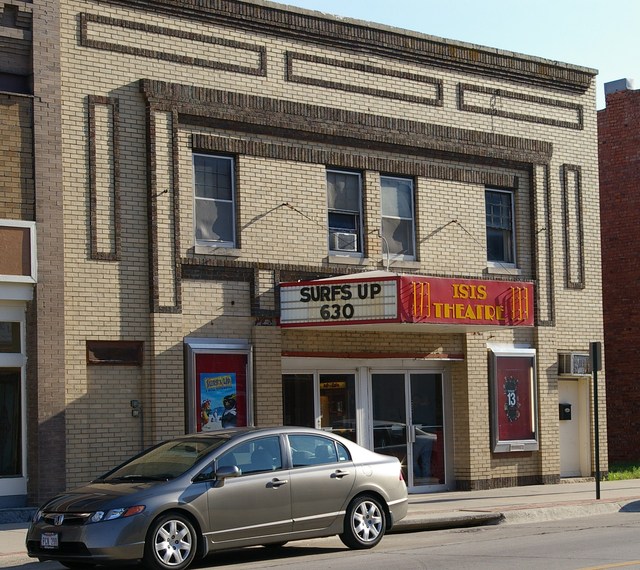 First building in the region (several states) to have Air Conditioning. It was also built for sound movies before they were being produced. (Jazz Singer, 1927). Contractor who prompted the owner of another movie theatre in Crete to build a grand movie palace, worked in Hollywood building sets in the 1920’s, but when his wife became pregnant, they moved back to Nebraska where he put his knowledge of the movie business to use.

First learned of this theatre while reading about a theatre in Etowah TN….the Gem. The article about the Isis was in the Knoxville Sentinel. Love the art deco interior!

Great History of the Isis Opening Night – February 25, 1926 The Isis Theatre in Crete Nebraska was ahead of it’s time. The Burris family who owned the Lyric Movie Theatre in Crete built the grand movie palace with state of the art features. The contractor, Otto Feeken had previously worked in Hollywood building sets. He was friends with the Barrymores and Mayers. When his wife became pregnant and wanted to move back to Nebraska, Otto brought with him the knowledge of movies and movie theatres.
The Isis was the first building in the region to have Air Conditioning. It was the first to be designed and built with the technology. Theatres were the first to adopt the technology to provide comfort for their patrons. Carrier installed the first system in NYC the summer of 1925.
The Isis was also built for sound movies, but sound movies were not being produced until 1927 (Jazz Singer), and not available in Nebraska until 1930. For the movies played the first few years, an orchestra pit housed pianos and an organ. The orchestra pit area is still visible but covered by wood.
The theatre featured 425 seats when built. People were smaller in size, and over time, the size of seats have increased. Currently the theatre has 300 seats with cup holders.
The theatre had a Women’s Lounge with a “Crying Room” for infants and small children who were noisy. The glass window is still visible in the auditorium. Opening Night was a grand affair, where Mrs. Benjamin G. Miller of Crete unveiled the Nebraska State Flag. The newspapers of the time dedicated their entire editions to Nebraska’s Premier Movie Palace. Mrs. Miller is also credited for planning the first living Christmas Tree in America at the Crete Public Library. Otto Feeken built several structures in Crete. Most in the California Spanish style of architecture. His “Honeymoon Cottage” is on the corner of 14th and Norman. He built Dr. Lillibridge’s dentist office (now Jirovec’s) in the Streamline Modern style of architecture. This was the first dentist / professional office to be located on street level. Prior to this all Dr and Dentist offices were located on the 2nd floor above downtown businesses.
The bungalows on the north side of the block of 13th to 14th and Kingwood to Juniper were also built by Feeken. The two twin bungalows were ahead of their time for Nebraska, as all the living quarters were on the first floor. Fahrnbruch who owned the Western Auto Hardware Store built the home on the west side, the other was for the theatre owner, Mr. Burris. The Spanish style home on the west side of Grove, between 10th and 11th was another one of Otto’s buildings. Crete was a vacation spot for Nebraska and the Midwest. The Blue River was noted as being particularly beautiful around Crete. As a result, the State and regional organizations like YWCA and YMCA, Girl and Boy Scouts had Camps and cabins along the river. Chautaqua events were held at Tuxedo Park regularly. As a result of the tourist trade, Crete had three movie theatres to cater to the entertainment needs. The Lyric was directly across the street from the Isis and was owned by the Burris family. The Lyric building is now the west side of the VFW Club. The Times Theatre, which was on the first floor of the Crete Opera House, now the present site of Great Western Bank. The Lyric was half the size of the Isis, with the Times being of similar size to the Isis. The name Isis comes from the Egyptian Goddess Isis. Theatre goers of the time would watch “News Reels” and see news from around the world. King Tut’s Tomb was discovered in 1922, and they featured the treasurers unearthed from the tomb for years. This created a fascination for all things Egyptian, and as a result, The Art Deco style took a lot of ornamentation from the Egyptians. Theatres across the US had Egyptian names and themes. Isis was a common name for Theatres, but only a few survive today. He bought the theatre in October 2005 but has worked there since 1982. The Wiseharts from Seward owned both the Isis and Rivoli for over 26 years. They still own and operate the Rivoli, but sold the Isis in 2005. Prior owners of the Isis are the Kassabaum, Rozanek, and Burris families