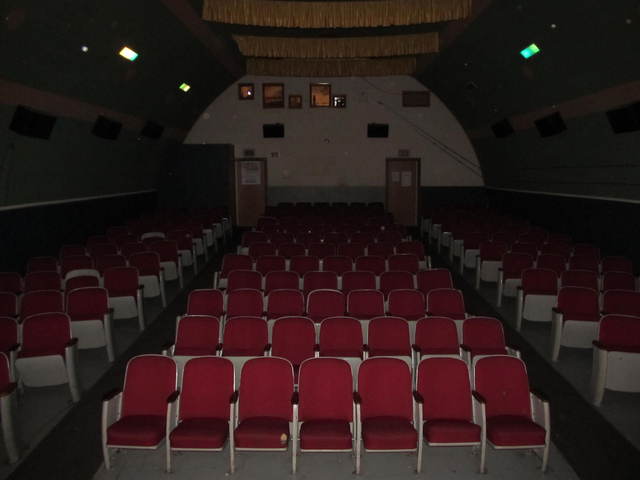 The Lynn Theater in Lynch, Nebraska opened June 13, 1954. This theater appears to be a Quonset Hut.

Don and Ardith Johnson built the present Lynn Theater building and opened it up for business on June 13, 1954. On October 1, 1965 they sold the Lynn to LeRoy Nyquist of Spencer Nebraska who operated it for a few years. Don Johnson then repurchased the building in 1975, did some repair and remodeling work, and reopened to the public with the first show being “Animal House”. One memory of the very first opening night on June 13th 1954 was that a full house was in attendance and outside a high wind caused a power failure, resulting in the show being finished the next evening. Since 1993 the Lynn Theater has been operated under 100 percent volunteer help. At the current time they are undergoing fundraising for a brand new digital projection system and other renovations.

The Lynn Theatre has made the conversion to digital projection with 3D capabilities. Their web site is no longer working.

Facebook page for the Lynn Theatre, has “The Story of the Lynn”. Full chronological history.

The Lynn Theatre The Lynn Theatre in Lynch has provided many memories for people growing up in the Lynch area. Its beginnings go back to the early 1950’s. Donald and Ardith Johnson purchased the Lynch Theatre located in the I.O.O.F. Hall (present location of the basketball court) in the summer of 1950. They operated the Lynch Theater for several years. Don recognized the need in this area for a new modern theatre and went into action. He acquired 3 lots on the west side of 4th street to build his theatre. (Present Location)

Wanting construction to go as quick and economically as possible, Don chose a Quonset brand building for use as the outer shell. This building featured a sloped floor and a wide 11 ½ by 20 foot screen which was to be one of the foremost features of the new theatre. It was one of the first such screens seen in quite a wide area. The new theater had seating for 224 and featured a “cry room” which allowed the mother and fussy child to watch the movie from behind a plate glass window while hearing the movie through its own speaker. The Theatre was completed in June of 1954, marking Sunday June 13th as the grand opening. Open house began at 1:00 p.m. and continued until 4:00. Several movie shorts were shown at 1:30 and 3:00 for the public to enjoy. That evening at 7:30 the very first full length movie to ever grace the screen of the Lynn was shown to a capacity crowd. The movie was “The Untamed Heiress”. Unfortunately during the first showing a high wind came up and caused a power failure in a large section of town, which included the theatre. Many returned Monday evening to see the finish of the movie. On October 1, 1965, Don and Ardith Johnson sold the Lynn Theatre to LeRoy and Fern Nyquist of Spencer who also operated the Boyd Theatre in Spencer. Leroy Nyquist operated the Lynn until 1974, when it was sold to Delbert Nielsen of Lynch. Under Mr. Nielsen’s ownership the theatre was not in operation. Don Johnson repurchased the building in 1975, resuming operation of the theatre. In 1978, some repair and remodeling work, primarily to the lobby area was done.

Lynn Theater when it was owned by LeRoy and Fern Nyquist in 1972, note old doors and glass blocks before remodeling by Don Johnson in 1978. After remodeling was completed the first movie shown was “Animal House”. The theater provided many jobs for Lynch people over the years. A long time projectionist was Russell Moffett. Don and Ardith continued to operate the Lynn through the 1970’s and 80’s when many of the “Small Town” theatres closed their doors due to the pressures of a reduction in rural populations and the coming of the new “Multiplex” theatres that were being built in larger population areas. Sadly, Don closed the doors to the Lynn in 1991. It didn’t take long for the Lynch community to recognize the loss of the Lynn Theatre. If the status of the theatre was going to change, it was going to take the entire community to make it happen. In the spring of 1993 the Nebraska Department of Economical Development hosted a meeting in Lynch. The Theatre was identified as a priority to Lynch. Initial funding for the renovation and reopening of the theatre was spearheaded by the Richard Nielsen family of Lynch who at the time owned the building. The Lynch Centennial Committee and Modern Woodmen of America along with other citizens also, provided funding. The Lynch Community Theatre Organization was formed at this same time. This time, the theatre was going to be operated in a new way. All aspects of operating the theatre were to be volunteered. Sheets were placed around town so people could sign up to work a committee. It didn’t take long for a full list of ticket takers, projectionists, concession and cleaning personal to sign up and volunteer. Many volunteers who started working at the theatre in 1993, are still doing so to the day of this writing. The grand opening of the “new” Lynn Theatre was held on Friday night July 16th, 1993. The first movie played at the Lynn under the operation of the Lynch Community Theatre Organization was “The Last Action Hero”. The Lynn Theatre continued to operate throughout the rest of the 90’s. On several different occasions funds were raised to replace different projection equipment including the projector, film platters and sound system. The weekend of July 17, 2003, saw the Lynn Theatre celebrate its 10th anniversary with a large crowd on hand to “Spin the wheel” for a prize. The movie showing for that weekend was “Holes”. By the year 2011, it was getting increasingly harder to book movies. This was largely due to the fact that many of the movie companies were starting to phase out the 35mm film movies and producing more movies in the digital format. The 35mm film, which was still used at the Lynn, had been the norm in the theater business for over 100 years. On February 15, 2012, a meeting was held at the Lynch Community Hall concerning the future of the Lynn Theater. The 35mm film was expected to be completely phased out by 2015, in favor of digital projection. Digital projection, however, was quite expensive and signaled the final “nail in the coffin” for many theatres big and small. A price of at least 70,000 dollars was needed to convert to a basic digital projection system. It was decided that if the theater was going to attempt to raise the money they should set a loftier goal of at least $85,000 so a 3D digital projector could be purchased along with other much needed updates including a new sound system, seating, carpeting, and restoration of the marquee. The figure of $85,000 scared a lot of people who thought that perhaps 35mm film would already be phased out completely by the time such funds could be raised. What happened next is something that nobody could believe. Before the meeting was over three individuals each presented checks of $500.00 dollars to the theater’s committee. The word of the fundraising spread like wildfire. Individuals and several organizations followed suit and pledged funds as well. Within the first 16 hours of the fundraising campaign $14,000 dollars was raised which went to show people just how obtainable the goal really was when they worked together. A large freewill donation spaghetti supper and silent auction was planned for Saturday May 19, 2012, at the Lynch Public School gym and cafeteria. When the week before the May 19th benefit came around nearly $62,000 dollars was already raised. The benefit spaghetti supper and silent auction netted another $34,000 dollars making the total fundraising to that date $97,000. This all happened in two months and four days from the initial meeting concerning the switch to digital projection equipment. A fundraiser street dance was already planned at the Nebraska Inn of Gross, Nebraska, along with some other smaller fundraisers. By the time fundraising had ended, well over $100,000 was raised, thus the Lynn Theatre was saved.

On Sunday July 8, 2012, the final 35mm film to ever grace a theatre in Lynch made its last cycle through the Ballantyne projector. The movie was “Madagascar 3: Europe’s Most Wanted”. Joe Micanek had the pleasure of rewinding the final 35mm film from the platter. The very next day, all of the old equipment was removed in preparation for a brand new RealD 3D digital projector installed by Randy Haberthur of the Midwest Cinema Service in Des Moines, Iowa. On Friday evening July 13, 2012, all the new equipment was installed and ready for the first ever digital movie to be shown in Lynch, which was “Men in Black 3 in 3D”. Rocker-recliner seating, and new carpet was later installed. The Bristow Lions Club was responsible for providing patrons with closed captioning and assistive listening systems. The needed repair work was also performed on the original “Populuxe” era neon marquee. Many other features of the Lynn still take you back to the mid 1950’s including the vintage Manley Model 44 Aristocrat popcorn machine. Over the years the Lynn Theatre has had the pleasure of being the place where many first dates, first kisses and friendships were made. It draws many loyal customers from Boyd, Knox and Holt counties in Nebraska as well as patrons from South Dakota. It has seen a marriage proposal and even hosted a wedding ceremony. Many other towns have come to Lynch wanting to know “How we do it”, with interests of reviving their own home town theater. When it comes down to it, the Lynn Theatre on the date of this writing would not be in business without the 1000s of volunteer hours and monetary donations of many people in the area. At no time, have any government grants or monies been received for improvements and updates. We as a community, with pride can most definitely call the Lynn OUR OWN!