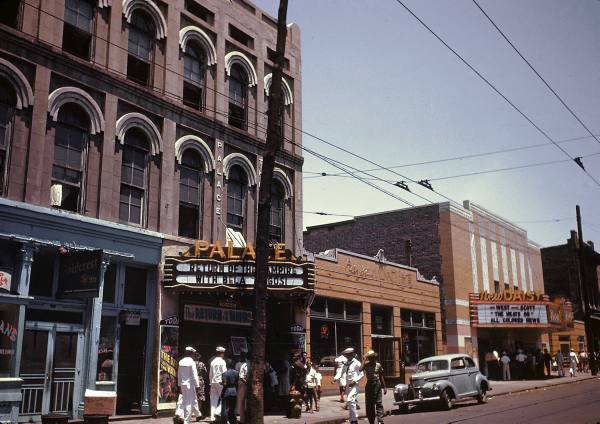 The first theatre opened at this address in 1908 and was a storefront nickelodeon called the Pastime Theatre. It was opened by Sam Zerilla and closed in 1917. In 1919, Anselmo Barrasso and the Pacini brothers, Lorenzo and Angelo, opened the Palace Theatre at the same address. The original Pastime Theatre space became the lobby, and a new expanded auditorium was constructed behind the building with a full stage, and the new Palace Theatre became the largest ‘colored’ theatre on it circuit.

It was famed more for stage entertainment than movies (in later years a film after the stage show might play to an empty house). The acts were so popular that the Thursday Night Rambles were scheduled for white patrons only at midnight. A story persists that white people were sometimes permitted to sit in the balcony for regular shows. After World War II, Beale Street was beginning to decline and the building was modernized in 1949 to compete with the brand-new Handy Theatre in the Orange Mound neighbourhood.

The Palace Theatre closed in 1962 and became so dilapidated that it fell to urban renewal, even though it had an important history. Today a nightclub occupies that address.

The Palace Theatre was originally a Vaudeville house catering for a black audience. Listed in Film Daily Yearbook;1931-32 and 1940-1955 as a Negro theatre with a seating capacity given as 1,100.

Here is a 1944 photo from the new Life Magazine collection on Google:
http://tinyurl.com/6jq6hy

Here is another LIFE 1946 photo of the Palace, just beyond the New Daisy,
View link

The modern facade on the Palace in the 1950s photos was the work of local architect Robert Thomas Martin who designed the renovation of the house that took place in 1949. The third floor of the Palace building was removed as part of the project.

An interesting revelation in the July 9, 1949, Boxoffice item about the renovation was this:

“Midnight rambles were held on Thursday nights for whites at the Beale Street Palace for 21 years. Whites were seated in the balcony and Negro patrons downstairs. They were discontinued in 1941 because of the war, but will be resumed when the remodeling program is completed.”

I don’t know that the midnight rambles for whites ever were brought back after the renovation, as the African-American movie industry that made the films presented at such shows was already on its last legs in 1949.

The Midnight Rambles were stage shows. It is possible they were revived (have not researched that) but Beale was declining in the early fifties.

Here is an interesting bit of atmosphere from the heyday of the Palace Theatre. Williamson’s Beale Street Frolic Orchestra was the pit band at the Palace in the 1920s. The band made some recordings for Victor records, and two takes of each of four of their original songs, recorded in 1927, can be heard at Red Hot Jazz (requires RealPlayer.)