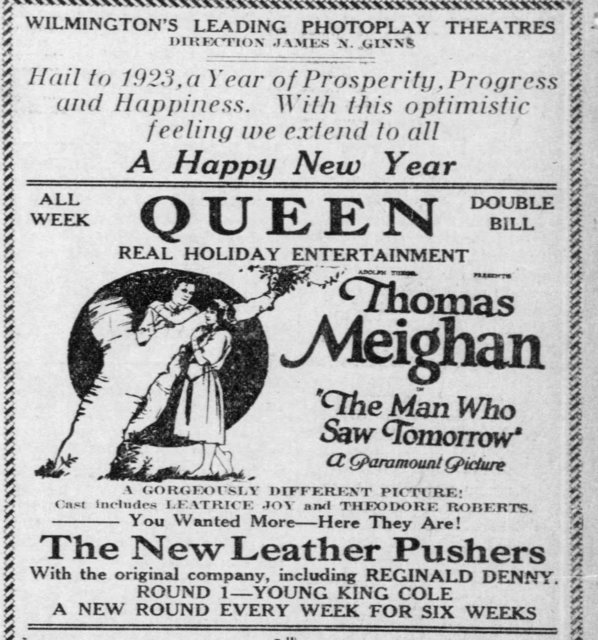 The Queen Theater in Wilmington, DE was built in 1915 at a cost of $250,000. Seating on opening day February 16, 1916, is given as 2,000 seats. It was equipped with a Moller 2 manual organ which had 31 registers. By 1941 it was operated by Warner Bros. Circuit Management Corp. In 1942 architect William Harold Lee remodeled the theater. The Queen Theater closed on April 19, 1959. The last movie to play there was Vincent Price in “House on Haunted Hill”.

This is a description of the interior given on a Delaware history site: “Its auditorium and balcony seated 2,000 people and was designed to offer a completely unobstructed view of the screen and stage. The lobby walls were decorated in Alaskan marble, the only such use of that material in the country.

Above the large stage was a mural representing ‘Science’ and on either side of the walls above the balcony were six different paintings representing themes such as ‘Music’, ‘Sculpture’, and ‘Beauty’. A Japanese garden formed the backdrop for the stage".

“Soon, Wilmington’s Queen will reign again. But this time she will reign as a live music venue, not as a movie theater.”

New pics and story about the revival. It is a Buccini/Pollin Group project and is looking for tenants.

Recent photos of the interior and exterior of the queen can be found here: View link

The “light up the queen” link above has a nice photo gallery and thelatest news – they just had the groundbreaking for the restoration on October 2, 2009! Looks like this place will be reborn! Auditorium is in prettyy ropugh shape, but looks like the original details can definitely be restored. Has kind of a beaux-arts look to it.

So, The News Journal ran an article in the paper 11/9/2010 (“The Queen reveals a bit of her old self” Page B5 in the Life Section) that indicated that demolition crews found three of the six paintings intact (beauty, painting and music) and with no water damage still in place. The other three (lyrics, sculpture and dancing) were removed during a Warner Bros. refurb of the Queen in the early 40’s. They (Buccini/Pollin Group) are modifying their reconstruction plans slightly to have these visible with house lights on them. Nobody had any idea they existed. What initially struck me was that with their mention in the theatre description by lost memory three years ago, how nobody had any idea they existed, unless nobody is doing resaerch for the reconstruction. Don’t get me wrong, I’m glad the Queen is getting this attention and I wish them luck in these times, it’s just…basic research, people.

Here is the newofficial site for the Queen. It is being run as a music venue by World Cafe Live, a licensee of WXPN radio in Philadelphia and its World Cafe program, distributed nationally by NPR.

Status can be made Open, with Live Performances as the function.

In recent research, I came across newspaper advertisements for Bela Lugosi’s “Horror and Magic Stage Show” which convened on the Queen Theater stage on Sunday March 18, 1951. On the off chance that one of the readers of this site may have attended the show, or may have a relative who attended and told them details about it, any information would be appreciated. I am doing ongoing research on Bela Lugosi and can be contacted at Thank you!

The Queen, as a movie theater, closed April 19, 1959. The last movie ad for the theater – “House on Haunted Hill”, is in the photo section.