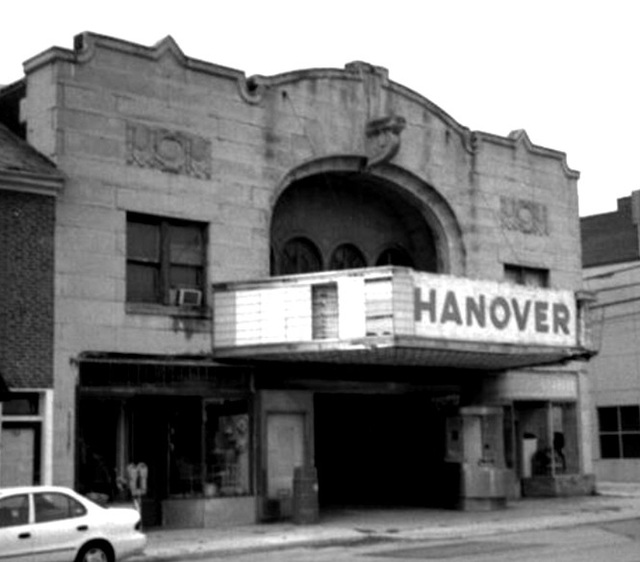 Originally known as the State Theatre, this theatre opened September 28, 1928 with William Haines in “Excess Baggage” and Stan Laurel & Oliver Hardy in “Should Married Men Go Home?”. It was equipped with a Wurlitzer 2 manual 8 rank pipe organ which was opened by organist E. Wayne Klaiss.

In the 1940’s the State Theatre was operated by Warner Bros. Circuit Management Corp. From 1950 the State Theatre was operated by William Goldman Theaters Inc. who closed the theatre on February 1, 1965. It became a teen club & performance space. It was given a lavish makeover in 1965 when the ticket booth from the Park Theatre (aka Hanover Opera Theater) was installed, the original seats were replaced with new seats, the auditorium’s walls were covered with sound proofing fabric, and the theatre was renamed Hanover Theatre, again operated by William Goldman Theaters Inc. opening on May 14, 1965 with Richard Widmark in “Cheyenne Autumn”. It was sold to Fox Theatres (Reading PA) and was closed on August 30, 1984.

It was sold to antique dealers. Purchased in October 2007 by a private group of individuals who were planning to restore and reopen the theatre as a performing arts center. Sadly this never happened and the theatre building sits vacant and ‘For Sale’ in 2019.

On August 4, 2010 the company that is holding the theater pending restoration announced that they intend to sell the Hanover Theater. They did not anticipate starting the restoration for a number of years and they decided that it would be better for the revitalization of downtown Hanover to sell the theater to an organization or individual who was in a position to restore the theater as a public space. More info is available at the website,
http://www.HanoverTheater.info
The projectors and remaining sound equipment will NOT be sold to collectors, please don’t contact us about it.

Arthur Brounet was the decorator on this theater. We hope his great grandson Bob Marshall will see this and comment or contact us. We are doing a lot of research on this theater.

We just drove by this theater and it is For Sale

Hello, Hanover Enthusiasts! I’ve been trying to get in contact with anyone who can give me information about this theatre! I’m writing a business plan about rejuvenating vintage theatres and was hoping to base this plan around the Hanover theatre and save it! If anyone has contact information for who I could talk to about, it would be wonderful! The email I have found seems to be out of order!

Thanks ahead of time! I’ll keep checking this forum.

The State Theatre launched September 28, 1928 with William Haines in “Excess Baggage” supported by shorts including Laurel & Hardy’s “Should Married Men Go Home?” Architects were Gemmmill & Billmeyer (plans are in photos). On August 18, 1930, the Warner Bros. circuit took on the venue along with the Strand. Warner Bros. had to divest its theatre interests and William Goldman took on the State, Strand and Park in 1950.

Goldman first closed the Strand in 1953, then the Park in 1964 and, finally, the State on February 1, 1965 with “The Americanization of Emily” and “The Secret of Magic Island.” It soon became home for a teen club and performance space. Goldman was convinced to reconsider the decision and refreshed the theatre with a lavish grand reopening on May 14, 1965 as the Hanover Theatre. Its first film was “Cheyenne October.”

Goldman sold the venue to Fox Theatres of Reading. They would build a modern single-screen theatre that became a quad in 1983. It was only a matter of time before Fox would move on from the aging downtown theatre. The theatre closed August 30, 1984 with “Oxford Blues.” (The 1986 date is in error.)

All references to the architect of this building is Gemmill & Billmeyer including signed drawings - see, e.g., Variety (August 17, 1927, p. 30).