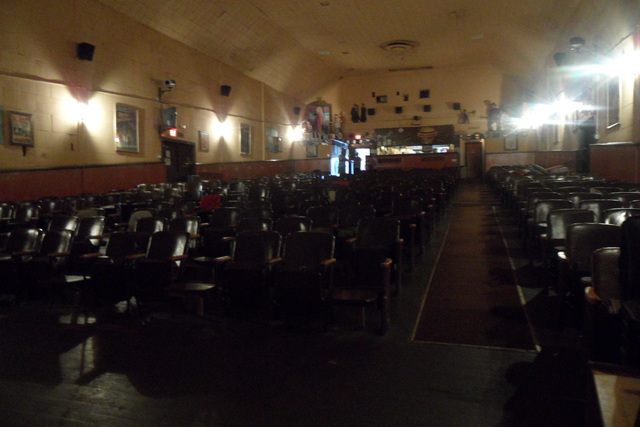 The 700-seat Elm Draught House Cinema, more commonly known as just “The Elm”, is simply amazing. It is only $4.50 to get in and you can buy a personal pizza, a soda, popcorn, and a bag of candy for under ten dollars. Even though The Elm is not the most beautiful or comfortable of theaters, it makes up for it in kindness, charm, and convience. The man that owns the theater is one of the coolest people you will ever meet and always has a smile on his face.

All over the one room theater there is movie memoribilia and just plain cool things. On top of all this, the concesions stand in inside the theater so if you want more popcorn you can get it without missing any of the movie. Every third chair is also taken out and made into a small table to put your pizza, soda, wine, or anything else you happened to have gotten at the concessions stand on. This theater just screams of memories as soon as you walk in.

Wow, this sounds like the ideal small movie theater with the ideal owner. Do you know when this theater, being single screen, was opened? Did it originally show silent films?

I have been going here to see movies since I was 20 years old, I’ll be turning 50 this year. This is a great place if you like room between seats, the best popcorn, cheap addmisson price and a homey type atmosphere. The gentleman who runs it is very friendly and is there to help you with anything you may need. He is also very knowledgeable about the history of this theater. My family and I love this place.

There is a MGM Theatre Photograph and Report form for the Elm Theatre in Millbury MA. There is a facade photo taken in May 1941. There is a one-story brick entrance which appears to be added on to a 2-story wood-frame building. The entrance has “1939” in Roman Numerals at the top. There are 2 sets of double doors seperated by about 10 feet. There is a rain canopy, but no marquee. The Report states that the theatre is on Elm St. The theatre was not a MGM customer. It was opened in 1939 and is in Good condition. The seating was shown as 350 but someone crossed that out and inserted 750, all on one floor. The competing theatre in Millbury is listed as the Paradise Theatre. The 1940 population was 6,900.

Lost- I guess this is the same; note the street number “35” at the entrance. It looks different from its appearance in the May 1941 photo on the MGM Theatre Report. At that time the front part of the building, in brick, was only one story high. There was a 2-story-plus building behind it. So it appears that the front has been enlarged and altered since 1941.

I used to go there when I was a teenager back in the early 90s and they allowed smoking inside and served beer. I hope they didn’t change that because we have been telling people from all over the country about that place (all smokers lol) But they probably don’t allow you to smoke a cigarette in there anymore. Anyone know?? I really hope one day they will allow us to bring in a joint. you know for medicinal purposes- maybe certain nights would be just for medical marijuana card holders because its hard to make it through 2-3 hours sitting that long when you are in pain and there isn’t any movie theatres that offer anything like that.

According to the chap working in the cinema during my visit, in September 2015, the building was originally a church. It became the Draught House in 1983 and currently has 280 seats.