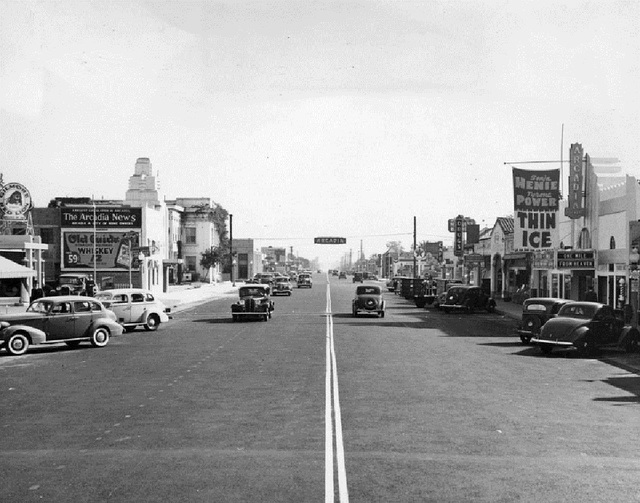 Opened in 1924, on Arcadia’s still sparsely-built Huntington Drive, this small theatre had a construction cost of only $20,000, but the owner, Charles E. Hess, paid an additional $12,000 for an organ to provide accompaniment to the silent movies.

The theatre operated through the 1930’s as Dean’s Arcadia Theatre, and was then sold to the rapidly expanding Edwards Theatre Circuit. Edwards did not operate the theatre for long. On February 7th, 1942, the Arcadia Theatre was destroyed by fire.

I think the two films in LM’s ad might be “pre-code” films, by the descriptions. A rather restrictive censorship was put on Hollywood in the early thirties, following the Fatty Arbuckle scandal, as the general feeling of middle America was that those Hollywood people were getting out of control.

The Production Code was in place in 1930 but wasn’t enforced until 1934, so anything before ‘34 is a pre-code, although movies such as Babyface, Scarface and The Story Of Temple Drake outraged the Catholics and other Americans and the movie studios gave in and started enforcing the code and following Joseph Breen’s iron fist. The Fatty Arbuckle fiasco was in 1921, so that was way before this.

My recollection is that the displeasure started with Fatty and continued through the Jazz Age to the end of the twenties. Stars like Clara Bow were known for nightly carousing. Clara was rumored to be a frequent visitor to Tijuana for abortions. So Fatty was a bit far back in time, but he probably started the snowball effect that led to the Code.

It’s true that the shenanigans of the stars were getting on the nerves of people who had just entered the depression but the actual code could only enforce the rules about movie content. Mainly violence and sex and making sure that if the character did bad then they had to pay in the end. The code had no power over the personal lives of movie stars. The movie studios did their own policing and hushing and covering up for their own stars….not because they were moral but to protect their investment against an increasingly ‘moral’ population. I wonder how Parasite Hilton would have fared in that atmosphere.

The L.A. Library has provided a larger version of the photo I linked to back in 2005, in the first comment on this page. Here’s the new version of Huntington Drive on November 7, 1937.

I’ve still been unable to pin down an exact address for the Arcadia Theatre, but I’ve found that the “Arcadia” sign strung across the street down the block in this photo was at First Avenue, and since the street numbers in Arcadia Start from Santa Anita Avenue (behind the camera’s position) with single digit numbers, the theatre was most likely somewhere from 30 to 40 E. Huntington Drive.

There should indeed be an a.k.a. for Dean’s Arcadia Theatre. The address of the Arcadia was 34 East Huntington Drive.

In the 1925 and 1927 Monrovia/Arcadia city directories there’s a listing for the Liberty Theatre, 42 ½ E. Huntington Dr., but no Arcadia.

Thanks to BillCounter for tracking down the address of the Arcadia Theatre, and its original name. The L.A. County Assessor’s office says that the building at 40 E. Huntington (which would include addresses from 40 to 44) was built in 1947, with an effectively-built date of 1980. As the fire which destroyed the Arcadia Theatre took place in 1942, when wartime building restrictions were imposed, a post-war new construction date of 1947 for the building that replaced it is not surprising.