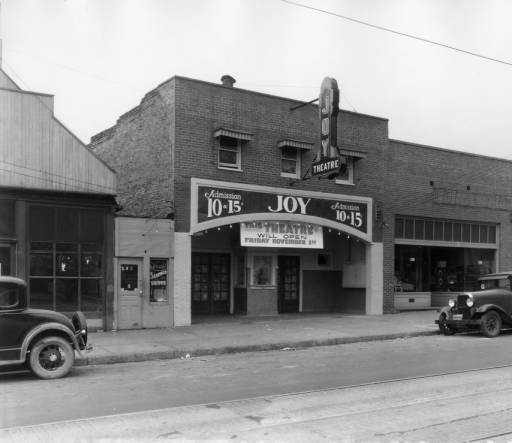 Originally opened prior to 1926 as the Picto Theatre. By 1928 it had been renamed Central Theatre. After a couple more name changes, it had been renamed Joy Theatre by 1941. It was still open in 1952 but had closed by 1955. It was recently used for Taoist Tai Chi exercise classes.

It was renovated in 2018 and reopened as the Central Cinema in August 2018.

This theatre was also called the “Picto” at one point. It is a neighborhood storefront hall, about 35 feet wide and 100 feet long. The marquee is long gone but a practiced eye can tell it was a theatre.

In a 1920 Knoxville Journal Tribune newspaper ad I find this hall listed as the Central Threatre. “Knoxville’s only suburban theatre.” The name Joy is particularly appropriate: the neighborhood is known as Happy Hollar (“Hollow” or valley for those who don’t speak Southern). Happy Hollar was fairly notorious for being THE place in Knoxille to get moonshine during (and after) prohibition.

Let’s raise a glass to the Joy!

I used to drive by that building just about every day, and never knew it had been a theatre. From the address and the photo, I can remeber the building. Not sure what was there in the 70’s when I lived in Knoxville. Happy Holler was still a pretty rough place back in those days. The last time I drove through there, about 3 years ago, it looked like the neighborhood is holding it’s own now. I’m glad the building is being put to a constructive use

Hey guys, could you check your Film Daily yearbooks in the mid-1940’s up to the mid-1950s and see if you find a movie theatre at 1121 North Central? It’s about a block east of this one, on the same side of the road and it looks really suspiciously like a post-war, low-rent theatre, maybe 300 seats. It’s been empty for years. I’m not finding it in my limited materials here at home and a trip to the library would have to wait until after new years.

Hi, Myself and a couple of friends are currently running a crowdfunding campaign to open a new movie theater at this location called Central Cinema. If anyone has more pictures or info about the history of this location, I would love to hear about it. Please check out our campaign and feel free to contact me. Thanks!

I discovered some new info on this theater whole doing research. It opened on November 3rd, 1933 with the Edward G. Robinson movie “Tiger Shark.” I’ve been going through newspaper articles searching for info and photos since we’ve been working on our theater in this building. Central Cinema opens next month! (June 2018)