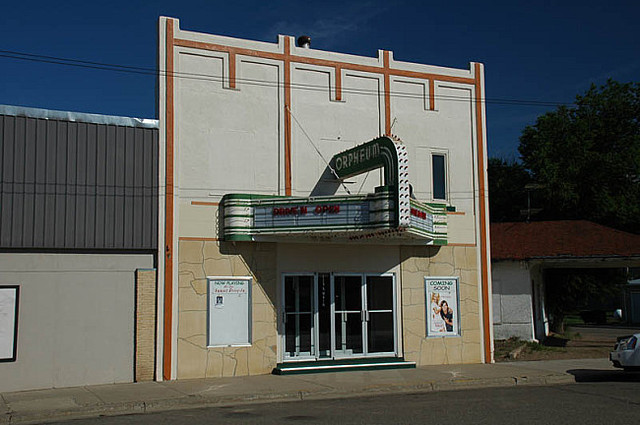 The Orpheum Theatre was opened by 1926. This 250-seat movie house on Main Street near Railroad Avenue in Plentywood is still operating.

This theatre is only shut down until the owners raise $40,000 for a new heating system. They do plan on reopening after auctioning off posters found in the theatre from the 30’s on.

The Orpheum Theater is alive and kicking. The Sheridan County Chamber of Commerce & Agriculture formed a non-profit corporation to purchase and operate it several years back.

It closes in the summer months so as not to compete with the Sunset Drive In. Previously the two theaters had been co-owned by a succession of owners over the years.

The most recent news regarding the Orpheum is the renovation of the marquee which was done this summer. It was taken down and professionally restored with paint and neon repair done. Digital projection and new seats are among the next projects planned.

Chuck1231, regarding the sound insulation, that’s not really a major concern. Even though it is next to railroad tracks, the tracks are a branch line that sees minimal traffic. If there is activity on the branch line, it is usually during daylight hours and doesn’t interfere with the movies in the evening hours.

The Orpheum Theatre is open and commmunity operated on a volunteer basis. The are showing current first run attractions. The theatre is digital. website