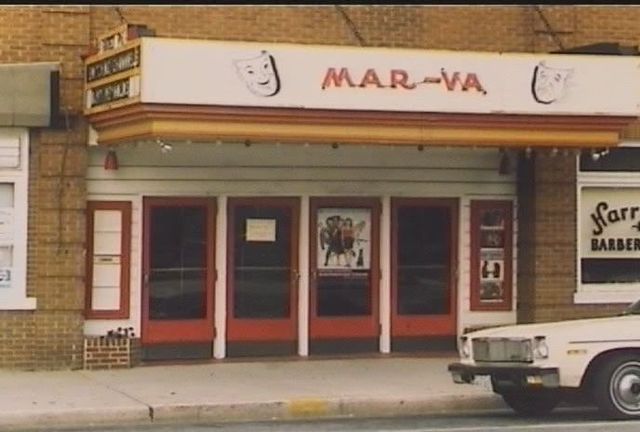 The Mar-Va Theater was renovated in 2008 and reopened as a performing arts center. Screenings of first run movies began in December 2008.

The Mar-Va Theater was listed on the National Register of Historic Places in 1996.

Here is a link:
http://www.kilduffs.com/MIA.html

POCOMOKE CITY — Emily Rantz remembers Saturday afternoons from her childhood, waiting outside the Mar-Va Theater for her parents to pick her up after a matinee.

Soon the 26-year-old Pocomoke City resident will have plenty of new memories of the historic Art Deco-style theater as she takes over as the manager of the performing arts center.

“Going there as a kid, you would always see people you knew, friends from school,” Rantz said, reminiscing about the smell of the popcorn and the candy she would buy. “People have so many great old memories of the Mar-Va, and we want to help them start making new ones.”

Rantz enters the new position as the Mar-Va Theater Performing Arts Center prepares for its first full season, which starts with a kickoff celebration on Jan. 9.

Volunteers have been working for more than seven years to reopen the former vaudeville and silent movie house. The theater first opened in 1927, selling tickets for 10 cents each. It was redecorated in the 1930s at the advent of talking films. Movies and performances continued there until 1993, when it closed for lack of patrons. By then, tickets cost $3.50.

In 2003, the theater was in ruins, hindered by lack of use and a leaking roof, said Arnold Torres, president of the Mar-Va Theater Performing Arts Center Board of Directors. That year, a group of volunteers bought the building and began an ambitious $1 million renovation plan.

Over the next seven years, the theater was remodeled to look just as it did after the 1937 renovation. With the exception of the central heating, air condition and new and more comfortable seats, the renovations are accurate to the time, Torres said.

The organization was able to obtain a grant to fund one full-time staff member and began looking for applicants earlier this spring.

Rantz stood out from the dozens of other potentials, Torres said, because of her enthusiasm, marketing experience and ability to reach out to different groups of people to fill seats.

Rantz, a Pocomoke City native, has a degree in mass communications and marketing from Salisbury University. Prior to taking the position at the Mar-Va, she worked in advertising sales for a company in Salisbury.

When a family member told her the theater was hiring, she jumped at the opportunity.

“I’ve always wanted to work in my hometown,” Rantz said, adding that driving to Salisbury each day was tiring.

The chance to give back to the community that raised her was important, she said.

“Pocomoke has that genuine small-town feel. It’s a great town to raise your kids in,” Rantz said. “My family is here, my husband is from here. It’s good to be surrounded by people who care about you.”

As she takes the reins at the theater, Rantz plans to use the experience she gained as an advertiser — helping other people market their businesses — to fill seats during performances.

“I would like to bring in people from not only the Pocomoke City area but down in Virginia, to Salisbury, Ocean City and lower Delaware. I’d like to put the Mar-Va back on the map,” she said.

And with events scheduled nearly every weekend in 2010 — including viewing of new movies such as “Sherlock Holmes” and “Up in the Air” — Rantz will have a lot to get done.

“I want to bring the Mar-Va back to life,” she said.

Mar-Va Theater linoleum print by Janie Bloxom Stouffer added. 1 of 20 made for the restoration committee in 1998.

The October 14, 1927 issue of Motion Picture News said that the Mar-Var [sic] Theatre in Pocomoke City had opened on Monday, October 3. The original owner was named Fred Bartlett.