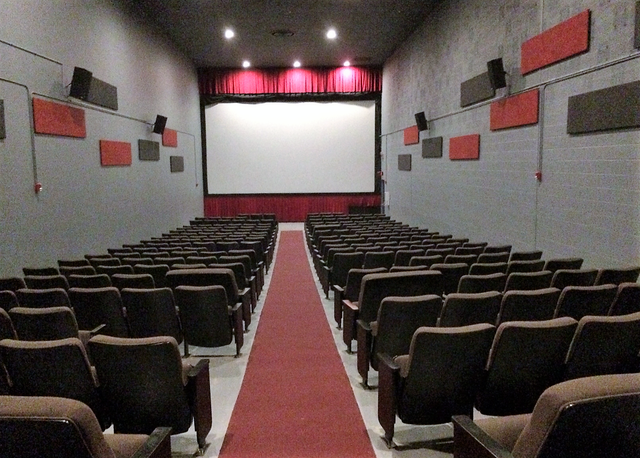 Since 1998 the manager of this theatre has done a great job to clean up this neighborhood movie house. It has gone from second run to first run back to second run in order to stay open. The theatre is a block away from a busy street and just doesn’t get the attention it deserves. I hope more families can use the theatre for the low cost entertainment it offers.

I had never been inside the Plaza until last night (8. July 2007). Built as a single screen in 1967, it was twinned somewhere along the line. One rather bleak wall was run down the middle of the theatre. Actually I’ve seen better decorated garages. But of course it was twinned in the “shoebox' era.
Today the Plaza offers the cheapest tickets in the Twin Cities, $1.50. The pop their own popcorn and use real butter.
But beware, there a number of broken seats in the auditoriums. The restrooms are really borderline. Clean but run down.
The presentation is fine and parking is free.

What. A. Dump. Ok look I give props to the owner for trying to keep a discount theater open. But the bathroom stalls are going to come down one day. They hang on with a screw. The chairs in the auditoriums are VERY low and you feel like you have gone crashing into the floor to sit down. If you are unlucky enough, you sit in one of the broken chairs they refuse to rope off. The staff is perpetually lazy and even the manager girl can be seen sitting doing nothing when there is a long line. I complained to her and she said it was none of my concern. I only missed ten minutes of the movie because she wouldn’t help the other young girl shoveling popcorn. Also in the winter it is freezing and they won’t turn up the heat. In the summer, it is stifling and they won’t turn up the air. Skip it. Go to the Maple Grove 10 or Riverview

Oh forgot to make a comment. Chuck1231 above is wrong. the theater only has TWO screens

The theater tends to do ok, despite its conditions. A lot of families go there on the weekends. That’s its best business. Iron Man and Dark Knight had sell out showings, I know that much. Sometimes they only had a few movies playing at a time. Right now there are like 6. Also kids movies sometimes last months. ‘UP’ I think was there for like 4 months, even after it was on DVD. I live in the area so I go there occasionally. You know look its an old theater so I guess some of the cosmetic stuff listed above isn’t a huge issue. Its just the service has been lacking lately. That’s kind of turned me off to going there.

In the winter time they don’t open their doors Monday-Thursday until the 4 pm-ish block of films. I guess it keeps cost down. A movie there on a weeknight is generally not too crowded. Sometimes its equal to a first run depending on whats playing, sometimes you might be one of a handful of people. I was alone for a couple movies one time. But the prices for family is the real draw. Popcorn, drinks, and snacks are practically half price of a major chain and tickets are never more than 2 bucks a person. So they do all right for themselves I would think. They’re still around.

The presentation is “fine”? Not hardly. The twinning was done in 1983 by Plitt. It was a Minnesota Amusement Co. (Paramount) build, in 1967. The screens are kiddy-wompus so there’s keystoning problems and the lamps are pretty dim.

On October 31, 2013, the Plaza Maplewood Theatre was taken over by Woodland Hills church – the entity acting as landlord for the facility. After allowing the former owner, Nathan Block, to build back the business, they kicked him out after 15 years of running this neighborhood theater when nobody else wanted it. They forced him to put on a new roof, air-conditioner and fire suppressant system at his own expense. Then after failing to renew his lease, assumed ownership of all assets without paying him a single dime. In addition, the entire staff was let go, putting a dozen good people, some of who had worked there for many years, out of work.

This “church” continues to operate the facility as a second-run movie theater, keeping all the profits, even though I thought churches were supposed to be “non-profit” entities.

Please boycott the Plaza Theater until this “church” gives it back to the former owner!

A nice article on Woodland Hills ownership of the Plaza Theater. https://www.twincities.com/2017/07/22/maplewood-church-places-faith-in-a-movie-theater-for-affordable-family-fun/