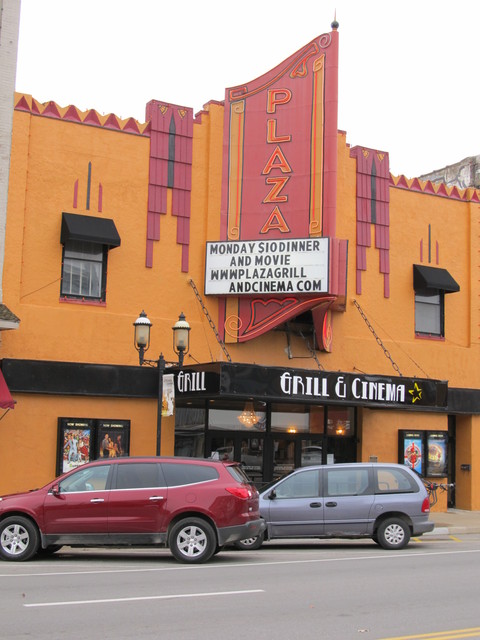 The area code above has changed. It is now 785. There is a recording saying “We will be closed until further notice.”

The Ottawa PLAZA Theatre has been reopen and is under new managment they have restored the outside and neon along with remodled inside. I am not sure of the date of reopening though. I looks great on the outside however I have not been inside to enjoy this thearte since I was a kid going to the sunday afternoon movie.

It looks like it’s called the Crystal Plaza now. I tried the website for the theater shown on this page, but it didn’t work:
http://tinyurl.com/36ap36

the title of the “oldest continuously operating theater” in North America might go to the New Victory on 42 St. in Manhattan. it opened as the Theater Republic in 1900 five years before this theater. the New Victory as operated as a theater of some sort since then -live theater, films, burlesque, adult films and after being beautifully renovated back to live shows.

This article with interesting photos from the March 8th, 2018 print edition of the Lawrence Journal-World newspaper (posted on their website on March 6th) says this theater is now listed in the Guinness Book of World Records as the “Oldest purpose-built cinema in operation”:

It now includes a movie memorabilia museum which the museum’s webpage says opened on May 15th, 2013. The newspaper article says historic tours of the theater are planned for later this month.

The article does not mention anything about it having had a grill and only calls it the Plaza Cinema. The museum may have replaced the grill as a photo in the article shows a “memorabilia museum” sign where a photo here on CT shows the “grill & cinema” sign to have been.

The article also claims it was called the Yale between being called the Bijou and the Crystal.

More history and videos on the Plaza’s news page.

The Bijou opened in this location on May 20, 1907 with the films, “Julia at the Barracks” and “Young Tramps.” The theatre moved from 117 East Second Street where it had operated prior. Two years later, on May 17, 1909, new operators called the theatre the Yale Theatre. On July 10, 1909, the Yale closed. New operators took on the location and refreshed the interior and exterior of the venue.

On September 29, 1909, those new operators opened the theatre under the name of the Crystal Theatre. In 1929, the Crystal switched to Vitaphone for sound films. Listings are soon discontinued. On February 7, 1935, the theatre changed names to the Plaza Theatre after a $25,000 makeover under Fox Circuit ownership relaunching with the film, “Rumba.”

if the cinema didn’t open till 1907 how can it be deemed the oldest operating purpose built cinema? the building wasn’t purpose built as a cinema. said cinema was built within a pre-existing structure.