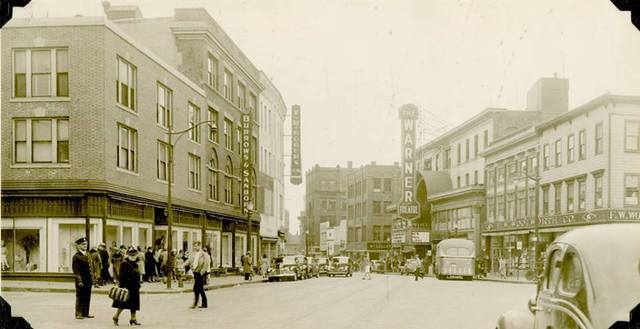 The MGM Theatre Photograph and Report form for the Warner Theatre in Lynn MA has a facade photo taken in May 1941. There was a boxy marquee with 3 lines of black letters on a white background. The movie appears to be Deanna Durbin in “Nice Girl”. There was a box office centered in the entrance below the marquee. The Report states that the Warner had been playing MGM product for over 10 years; that it was over 15 years old; that it’s in Good condition; and has 1023 seats on the main floor and 766 balcony seats; total: 1789 seats. The address is listed as “89 Union Avenue”. Competing theatres are: Paramount and Olympia. The 1940 population of Lynn was 98,100.

There was a robbery at the theater in November 1947:

LYNN Mass. Nov 24â€" (INS) A 23-year-old Salem youth was arrested today in connection with the $400 theater robbery in which the woman cashier and manager were slugged into unconsciousness. Patrolman Joseph Morgan took the youth into custody as he was standing in the doorway of a Central Square building. Morgan said he found a .22 caliber sawed off rifle on the man. Two thugs entered the Warner Theater on Union street just after Mrs. Rita Gagnon, 25, had closed her ticket booth and carried the day’s receipts into the office of Harold Cummings, the manager. The robbers knocked on the door and when Cummings opened the door in the belief it was an usher, the pair beat the manager and cashier into unconsciousness. They picked up the money bag, walked out through the lobby and escaped by hailing a taxi.

The Warner Theatre was one of five Massachusetts theatres of the Mark Strand New England Corporation that was sold to Warner Bros. in 1929. Prior to the sale to Warner Bros. it was called the Strand.

The Warner Theatre opened as the Mark Strand on November 15, 1915. The Mark New York Theatres were acquired by the Stanley Company of America in 1926 and subsequently by Warner Bros. in October 1928. The Mark Theatres in Massachusetts were acquired by Warner Bros. in November 1929 and the Mark Strand became the Warner in April 1930. E. M. Loew acquired the Warner in 1967 and renamed it the Cinema. It closed in 1972 and was scheduled to become an indoor mini-mall.

As the Strand, this theater is listed in the 1927 Film Daily Yearbook as having 2,300 seats and open daily. That seat count seems too high.

I am looking at the claimed location on Google and there isn’t anything there…only a the footprint of a building. If that is the right address then the theater is long gone as of a couple of years ago

The Mark Strand Theatre in Lynn was designed by Thomas Lamb. This item is from the April 3, 1915, issue of The Moving Picture World:

“A new Strand theater is now under construction in Lynn, Mass. The new theater will have a seating capacity of 2,000 and represents an expenditure of $250,000. It is located on Union street and takes in an entire block measuring 22,500 square feet. Thomas W. Lamb, who drew the plans for the Strand theater in Manhattan, is the architect, and Moe Mark is the president of the company controlling the theater which will open September 1. The building will be similar to the New York Strand and will contain stores and offices. Mr. Mark will also erect a new Strand theater in Worcester, Mass., which will have a seating capacity of 2,000. The operations will commence early in April.”