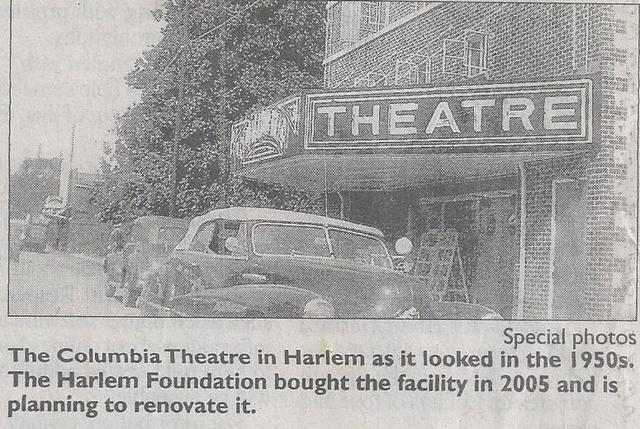 The Columbia Theatre in Harlem, Georgia opened on August 11, 1949 with Frank Sinatra in “Take Me Out to the Ball Game”. It was closed in 1963. A 2005 article that I found on this theatre states the following:

“The City of Harlem in Georgia has purchased the old Columbia Theatre, the building with the Laurel and Hardy mural on the outside south wall, facing the Gordon Highway.

This old building is practically a shambles inside. It was a theatre many decades ago, but in recent years it’s been used for a variety of purposes, including flea markets and having rooms built to house tenants/owners. But that is all about to change. The City of Harlem recently bought this old building and is now doing two things: having volunteers go into the building and clear it out of old junk (by the truck-loads), and fund raising that will be needed to do the major restoration - in excess of $700,000. If you are inclined, I’m sure the folks in Harlem would very much appreciate any donations".

Well, I sent a Letter to the Editor about Cinema Treasures and how the locals could add stories. “YOU CAN LEAD A HORSE TO WATER,BUT YOU CAN’T MAKE HIM DRINK IT.” They printed the letter. HAD such a big write up in the paper about old employees and how they loved theCOLUMBIA. “YOU CAN LEAD…….

The pictures look very nice. Any chance on restoring the Laurel and Hardy murals on the side.

I drive by there quite a bit and have tried until I am blue in face to get these folks to look into Cinema Treasures and answer questions.

I have been inside and long time ago the theatre floor was leveled off for businesses that used that space. SO inside it really looks like a hardware store could be there. I never got to the booth,but i think some of the equipment might still be there.

they are slowly now rewiring parts of the Theatre and plan to remove the raised floor,hopefully soon.

Inside work still on hold,front of marquee is great.

INSIDE work is of a gutted building,,

Great news! It was announced on 11th August 2018 that the Columbia is going to undergo an extensive renovation, so by summer 2019 the city hopes to re-open it as a visitor center, a 50- to 75-seat theater for classic and contemporary films and it will also house the relocated Laurel & Hardy Museum that is the city’s biggest tourist draw.

Residents got a glimpse of what’s planned at a public meeting, during which they were shown the condition of the building and what needs to be done.

Mark Lorah, the Augusta structural engineer assigned to the project, said only the bottom floor of the three-level building will be restored as part of this project. The other two levels will be preserved, for renovation later. This decision was made largely “in deference to the budget” he said, which for now is $1 million. He added that some parts of the theater are in better condition than others. The original trusses are in good shape, and parts of the roof were replaced several years ago, soon after the city bought the building in 2005.

yep, I noticed they are really improving the old theatre..looks nice from the road…