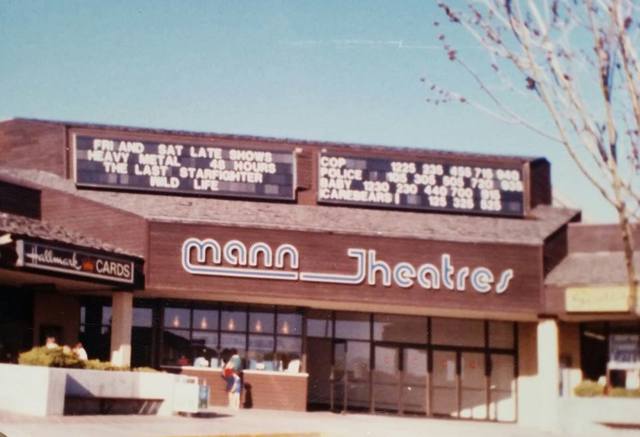 One of the casualties of the megaplex theaters. It is now a dollar store and it is hard to tell there was a movie theater there. It was right in the corner of the 5 Mile Plaza.

The Five Mile Plaza Theatre begain its operations under the banner of MANN THEATRES in December of 1979 – one of the newer complexes built in the Treasure Valley since the opening of Overland Park 3 in the summer of 1977.

Operations of the 4plex began slow since of the location that this theatre was located at .. at the corner of 5mile and Overland..being that time was considered out in the rural area of the community.

In December of 1988, MANN THEATRES had to perform a financial adjustment in their operations and had to let their Boise Location go as a package to sell off the Idaho locations.

CARMIKE then continued operation of the 4plex after the EDW’s 21 complex opened up the road on Overland, but situation forced CARMIKE to leave the Boise area and the location was converted to a dollar store in 2001.

I found this site while trying to dig up some photos of the original Mann 4 theater at Overland Park. In 1978, my parents built a house in the area now called Countryman Estates (I was 8). Learning the Mann4 is gone makes me feel a little sick — all those years as a boy walking through a field to go see summer movies — E.T., Star Wars, Star Trek(s)… and afterward off to the arcade next door (can’t remember the name). I also frequented Radio Shack next to what became an Albertson’s — fascinated by the computers that would lead to a career at Hewlett-Packard. Good times, good times.

re “and afterward off to the arcade next door (can’t remember the name).” That was a PoJo’s arcade (there were more a than a couple in the Treasure Valley in the 80s). Thanks for sharing your memories.

Hey: do you recall the old “Odell’s” butter ads (http://en.wikipedia.org/wiki/Odell’s) that ran prior to the upcoming features trailers? I only recall seeing them at the Mann 4 Theater. They were very sensual in tone, had that golden 70s-era film look to them, and were narrated by a woman with as rich and buttery a voice as the product she was selling.