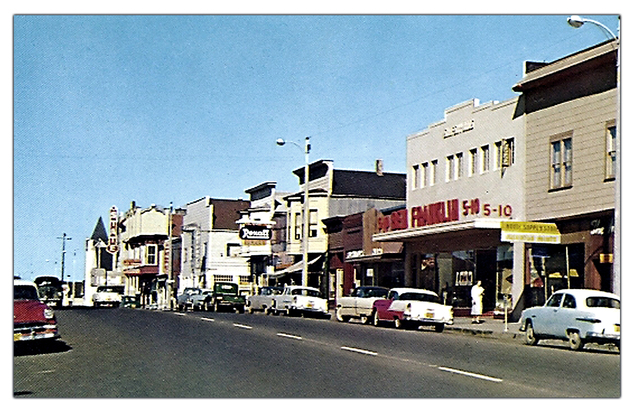 This theater was opened in November 1927, and was closed in September 1964. It was operated by the Redwood Theatres chain. It was demolished in 1977.

I searched for this theatre a number of years ago while in Ft. Bragg, and clearly, it had been long demolished.

The old State on Main Street may not have been demolished, just ‘gutted’ and revamped to other commercial use. Ft. Bragg had always been keen on keeping their old building exteriors intact, (historically).

I worked in Management for Redwood Theatres, aka Noyo Theatres for a number of years. In 1964 I was at the Noyo in Willits. The State was managed by a Mr. McBirney,(Mac). A well liked local family man.

At that time the State had already been shuttered in anticipation of the brand new Coast, (single screen) opening. Also a Redwood Theatre. The State had marquee already removed. The upright signage may have still been intact. I retain very little memory of interior.

While filming ‘The Russians Are Coming’, all star comedy cast. Norman Jewison, director, used the State almost daily/nightly for each days shoot, (rushes). Many of cast and theatre employees,(including myself) sat in. The new Coast was used for a ‘gala’ wrap party for cast and entire townsfolk. We screened: ‘Mad, Mad, Mad, Mad World’, and large portion of cast were on stage, some did a bit of comedy skits.

Mr.Jewison gave me permission to take photos, (between scene shooting) of whatever I wanted. Most scenes took place in Ft. Bragg, (Noyo Harbor) also Mendocino, Caspar and Westport areas. Even got to go fishing with Jonathan Winters, John Phillip Law and some film crew. A great memory for a young theatre manager.

I have also made a entry under the Coast Cinema, giving a bit of info on the original theatre before new owners and multi-plexing.

I updated Street View to the wrong location. The State Theatre was on the lot that is now a parking lot, just beyond the light blue, single-story Greek revival building with the Masonic symbol on it. That building is at 432 Main Street, so the theater’s address must have been 436 Main, assuming that the storefronts abutting the theater entrance were 434 and 438.

From the mid 1950s a photo of the State Theater in Fort Bragg.

The September 23, 1927, issue of The Film Daily said that George Mann expected his new State Theatre, under construction at Fort Bragg, to go into operation in November.