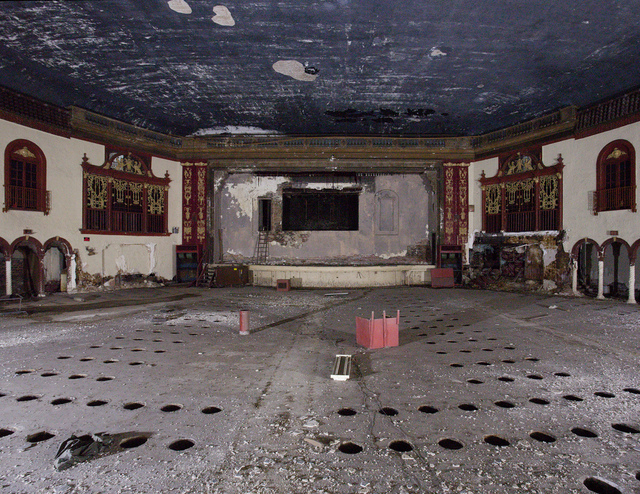 Built on the site of the Monogram Theatre (which has its own page on Cinema Treasures).

Located on S. Halstead Street at W. 35th Street in the Bridgeport neighborhood, the Ramova Theatre opened in September 1929 with John Boles in “The Desert Song”. It was equipped with a Western Electric sound system. It was a “sister” to the Music Box Theatre in Lake View, which was opened that same year. The architect of the Ramova Theatre was Meyer O. Nathan.

Like the smaller Music Box Theatre, which seats about half as many as the 1,500-seat Ramova Theatre, both were designed in Atmospheric style inside, their auditoriums built to resemble Spanish-courtyards. On the deep blue ceiling of the Ramova Theatre, “stars” glittered before each movie, and through the archways along the side walls were scenes of the Spanish countryside. Like the Music Box’s lobby, the blue sky with stars motif also continued into the ceiling. Faux-marble and gilded plasterwork were also in abundance, even more so than at the Music Box Theatre.

The highlight of the Ramova Theatre’s life came in 1940, when Charlie Chaplin had the Chicago premiere of his “The Great Dictator” at the Ramova Theatre and Music Box Theatre, since the Loop palaces which would normally host such events were uncomfortable with the sensitive subject matter of the film and wouldn’t play it on their screens.

By the 1950’s, the Ramova Theater was no longer a first run house, but began to show second-run features.

The theatre was closed in April 1985 with “Police Academy 2”, and has since sat vacant, but very much intact; a reminder of the neighborhood’s past and a viable and eminently restorable venue for Bridgeport’s future.

Now owned by the city, in April 2021 it was announced that a renovation of the theatre was planned to convert into a Community arts center. There will be a 200-seat small theatre space in the former balcony and the main floor would serve as a larger performance space. Costing $22.9 million, and with planning permission and a $6.64 million tax increment financing approved, restoration work was due to commence in October 2021 with a planned late-2022 reopening.

Can someone tell me when the last showing was @the Ramova month/YR. I no longer live in Chicago it’s been years since I’ve seen Chicago. the last time I believe I was @ the Ramova was 1974.

FYI. A candidate for 11th Ward Alderman is making her announcement tonight in front of the Ramova Theater.

Projects: The Ramova closed in April of 1985. I saw the last movie to play there; Police Academy 2. The poster was still pasted on the front of the theater for at least 15 years. Couldn’t forget it if I wanted to. Ha

There’s a meeting on the RAMOVA Theatre set for Tuesday, November 19th, 2019 at 6pm CST in the Nativity of Our Lord Church basement, as per 11th Ward Ald. Patrick D. Thompson. A developer has expressed interest in the property for entertainment purposes. Anyone wishing to comment and/or who cannot attend may email Ald. Thompson at and/or call him at 773-254-6677.

More information on the proposed plans for the Ramova can be found here:

A $23 million plan to redevelop the city-owned RAMOVA Theatre into a 1,600-capacity concert and performance space was announced at a community meeting Tuesday night by 11th Ward Ald. Patrick Daley Thompson. Developer Tyler Nevius plans to buy a privately-owned parking lot across the street and privately-owned vacant commercial spaces adjacent to the theatre that would be transformed into a brewery and a revived Ramova Grill Restaurant, with the help of nearby native and chef Kevin Hickey. Maureen Sullivan, a neighborhood native and past aldermanic candidate, had been campaigning to revive the RAMOVA for fourteen years. Her pro-restoration petition got 5,000 signatures in a few months, but without funding, her efforts stalled. Sullivan said her first memory of the RAMOVA was seeing “Bambi” there at age four and described it as ”like walking into another world. You smelled the popcorn as soon as you walked in, and it was like you were entering into a playground.” The RAMOVA was intended as a larger version of the MUSIC BOX Theatre some miles to the northeast, and was owned by a Lithuanian family who named it using a word for “peaceful place.” The city of Chicago acquired the RAMOVA in 2001 and advertised for a developer while spending $364,000 in masonry, roof and drainage repairs. Ald. Thompson said many were nervous over the signs of deterioration over three decades, but Nevius approached him in 2017 with enthusiasm. Nevius started a development company, One Revival Chicago, specifically for the RAMOVA, which seeks to get the theatre and a neighboring vacant lot from the city for $1 and $6.6 million in tax-incremental financing (TIF) assistance for the redevelopment. Nevius says he’s been negotiating with the city on staying on the project for at least ten years, or else the TIF funds would be repaid to the city. The plan goes before the Community Development Commission as early as December 10, then needs to be approved by the Plan Commission for zoning changes and the Commission on Chicago Landmarks (the terra cotta exterior of the theater could be considered a landmark), before it goes before the City Council for final approval.

Updated information about the renovation plans for the Ramova. Pictures show the extent of damage to the inside which needs to be addressed. https://blockclubchicago.org/2019/12/11/bridgeports-ramova-theatre-gets-city-funding-help-and-a-look-inside-shows-how-much-work-lies-ahead/?mc_cid=374858cbf7&mc_eid=11e184853b